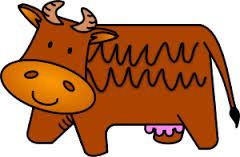 Miru loves cows. When she sees a cow, or any animal that looks like a cow, she touts her lips and utters a long “mooo!” I don’t know where her little obsession came from, but cows are the largest animals she knows thus far, and her first bovine encounter had been overwhelming. She fled into her parent’s arms, crying, after she had first mustered the big black and white beasts on the other side of the fence. We (admittedly, me, daddy) decided that she should overcome that budding phobia and confronted her again within 24 hours. She was a lot calmer, and after a while she started to like the cows. We lifted her over the fence and put her in the grass, where she mooed in unison with her new friends.

Ever since, she is very keen to comment on any cow-like animal with a big smile and a “mooo!” This gave me the idea to turn things around: If Miru doesn’t recognize it as a cow, it’s decidedly not a cow. And that’s very helpful if you want to learn to draw cartoon figures of cows. I took some paper and tried to copy a simple cartoon cow, which I presented to Miru. After a few tries, she gave me her blessing and anointed my artistry: “mooo!” I must have drawn a cow.

The criterium for cowness could not have been clearer. What a joy! And how much can we gain if we form our judgements like the way Miru does: Seeing things like she is listening to them. Seeing things without the burden of associative ideas, without the clutter of fragmentary memories that cloud the view of the adult. Seeing things is comparing them with what we have seen before. So perhaps the idea that I like to entertain here is simply that a young child’s comparison material is still fresh. What she compares the images with, the cows in her mind, haven’t yet completely been absorbed by a cultural framework. Their hindlegs are still standing firmly in the wilderness, the domain that Miru hasn’t yet mapped in her mind, and that enables her to judge what something is on the basis of her very recent experience. In other words, a black cow – or a cow at night – can for her still be not a cow at all. Of course, that kind of flexibility in thinking is not a good idea if you want to survive a bovine stampede, but it is in approaching this child-like mind that our species has accomplished paradigm shifts, from Galilei to Einstein, Darwin, and Freud.

I have recently promoted the documentary film “cowspiracy” on social media, because I think more people need to see it. Cattle – their grazing, their methane emissions, their feed crops – is the largest contributor to climate change. We can’t pretend we are solving the global problems when we don’t address this issue. vegetarianism, in the context of the crowded industrialized world we live in, becomes a criterium for environmentalism. If you think humanity could thrive, or even survive, on the meaty diet the average European or American is eating today, then – mooo! – you;-