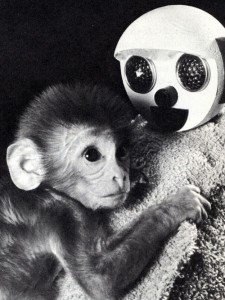 [series-miru]Miru is about 125 days old, and still the gorgeously cute and quiet baby she has always been. Yesterday, I used her in a little scientific experiment, the ethical justification of which derives from the fact that there was no need for an artificial reward, nor was there the need of inflicting anything remotely uncomfortable to the subject.

Miru likes the sound of little bells ringing inside a plastic doll that can sway back and forth on his spherical butt. When the researcher puts the doll next to the baby’s legs, and then takes the legs to kicks the doll, the baby learns how to reproduce this sound and begins kicking her legs independently against the doll. When the doll is placed next to the other leg, she doesn’t yet understand that the same thing applies there as well and she has to go through the same learning procedure. The researcher’s hypothesis is that the baby has not yet developed something like a body scheme, and can’t understand the effects of her movements on her surroundings. What the experiment did show, however, was that the baby is able to learn, even if only for a time span of several minutes. In conclusion, she shows perfectly normal and healthy behavior for a four month old baby.

If only they used these ethical standards for research with animals. I recently read Marc Bekoff‘s Animal Manifesto, an excellent short overview of six reasons why we should not harm animals. The author, who is an experienced researcher of animal behavior, has written an anecdote-packed and well-argued manifesto on behalf of all animals, from factory farm pigs to lab rats, and from wild bears to crustaceans. Despite the many graphic examples of abuse and mass murder of animals, he leaves us with some hopeful remarks that remind me of Stephen Pinker’s conclusions of his voluminous history of violence (The Better Angels of Our Nature: Why Violence Has Declined)

It feels good to read that we are wired for compassion, and our circles of compassion will sooner or later include other species too; I just wish this could all happen a little bit faster, before the seas are empty, the rain forest is a desert, trillions (1,000,000,000,000, not billions) more factory farmed animals suffered a painful death at the end of their miserable lives, hundreds of thousands of more species are lost, biodiversity and the health of the earth’s ecosystems is on its lowest possible point.

I hope the newspapers Miru is going to read in the 2020s will be filled with more good news every day than bad news.