We took a bus to Bariloche, a small town in the southern Andes that attracts many tourists. The bus ride was about 20 hours and really comfortable. By any measure, bus service in Argentina is superior. To Bariloche, there was only one bus a day and we had to wait until four. There
was a VIP-waiting room in the bus station, with internet connection and everything. We were feeling well before getting on the bus. We almost missed it because my watch was still ticking Rio time and my friend had to buy something in the supermarket, but it worked out fine in
the end. Her name was announced through the huge station and she appeared right on time. The bus crew had waited and we were very grateful. Just another bit of luck, I told her. Later, we had a short conversation about this, and I told her that of course it’s just an interpretation, but a nice one. On our way to Patagonia, halfway across Argentina. The first part of the road was unspectacular: endless flat meadows that looked just like the ones in the most boring parts of Holland or northern Germany. We didn’t see many cows but I had been reading the cows were black and white Dutch breed. No kidding: I could have taken a picture here and shown my friends at home – nobody would have guessed this is Argentina. After the sun went down, at about ten o’clock in the evening, we were served dinner, just like in an aircraft, and it was very good. There was plenty of Argentinian wine too. So there I sat in the semi-cama comfy bus-chair, leaning back in exciting dreams while the bus rolled through this big country towards the Patagonian town of Bariloche. By the time the sun rose the scenery had changed into what I expected to see here. 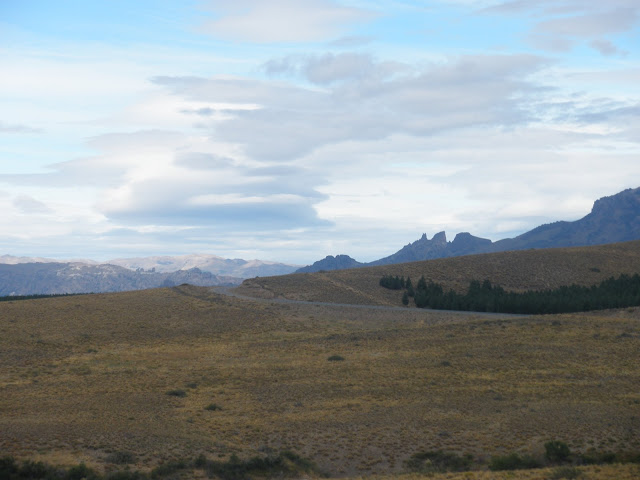 Rocky mountains on the horizon, dry stony riverbeds, brownish plains, no signs of life. A rich breakfast was served. I was amazed about the anachronism between the untouched land outside our vehicle and the luxury inside.