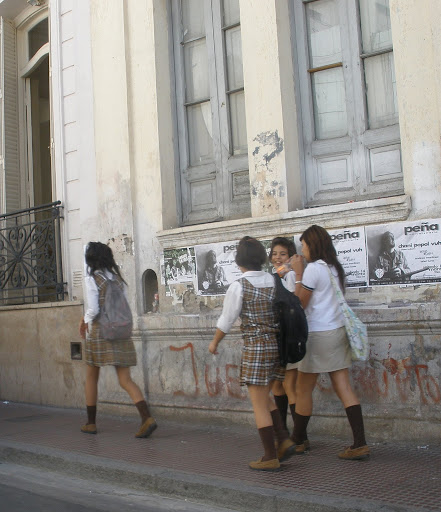 What would Jack have done? He would have treated Sara and drink a good Cabernet Sauvignon or Malbec with her, he would have lied his hand on her rounder parts and sing a hymn to the moon with her. He wouldn’t that care Sara fell from the sky. He wouldn’t have cared if she grew from the ground either.

In the Mendoza hostel I wrote a few pages. I couldn’t really focus on what I had to say; perhaps I had nothing to say.

After a walk through the large well-kept city park we wanted to taste what Mendoza is famous for: wine. A bodega offered wine tastings for the tourist. The most expensive vegan prosecco costs 340 pesos for one glass, that is about 100 dollars. For one glass of wine. The ladies smiled accordingly and served some tasty water as we were asked to wait for our turn. We looked at each other and the wine-menu that included a range of exotic upper class wines, and decided to sneak out the rustic patio. Wines of superior quality have every right to exist, just like the fruit flies that drown in it.

That night, we could have done the ultimate Argentinian thing: a cabalgata (horseback riding) during atardecer (sundown) to have an asado (barbecue) upon arrival. We could have trotted dully towards the bright peach sunset, singing gaucho cantos, laughing, make a huge campfire and warm the palms of our hands while the horse hoofs would scratch the barren ground, eat chunks of juicy quadril meat roasted on a slowly revolving pin with fat dripping into the fire that would have evaporated with a hissing sound. Unfortunately it was not available.

We tried to hitchhike to Cordoba instead, but at the access road to the main highway we didn’t have much luck. So we took the bus instead for 100 pesos en effectivo. In Argentina, always ask for en effectivo because it’s ten percent cheaper. It was a cama-bus but the service was way below the semi-cama we had experienced on our way to Bariloche, were the service readily surpassed aircraft standards. The night was no pleasure, but at least she brought us to yet another city.

That night I did not dream about delicious wines flowing from steep mountain slopes (again the slopes) into a lava pool where broadly smiling saleswomen bathed and measured the acidity with the greatest precision then chlorified it and bottled the wine in slender bottles that would start to talk so they had to put the cork on a special kind of phellem they had circumcised in order to close the bottles airtight.