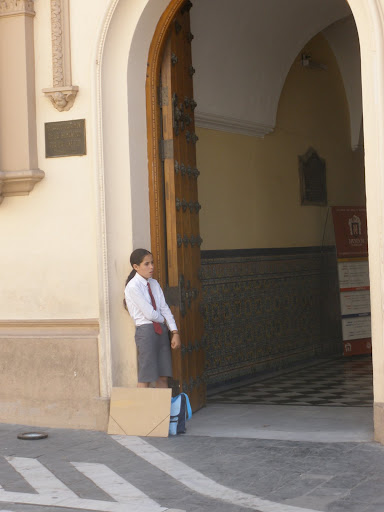 Daniel works at the Argentinian Correos. He is a very friendly and goodlooking guy. He travels daily between Cordoba and Buenos Aires for three months now. Before, he went to all parts of Argentina – he knows every Correos headquarter in the country. His camionette is accompagnied by a custodia-car to protect him from robbers since Argentinian highways are dangerous. On his way, he knows exactly where to stop and he eats a bar of Rhodesia chocolate during his break. He always drives at night so he doesn’t see much of the countryside.

We started to hitchhike late that day; took a bus to the entry of ruta 9, the main highway that connects Cordoba to Buenos Aires. We got a ride right away, in the back of a truck, to the service station where we started to ask the camiones that headed back to La Capital. Many of them had strict regulations so they weren’t allowed to take anyone, but after about half an hour we were lucky with a guy who drove the Correas – Daniel. We drove the whole night. The precision of his manoeuvring around the slower camiones was intriguing. We arrived in Buenos Aires very early the next morning.

In our culture, peope are used to swallowing huge amounts of narratives. I don’t want to bluntly shoot at this fact from my position here as a blog-author, but let’s just consider it. All the stories, all the movies, all the news facts. It might just be too much, it becomes like fast food. We eat and eat and stuff ourselves with fats that make us only crave for more of the same. The very diversity of the cinematographical and real-life narratives we are confronted with daily might result in a very monotonous diet.