[series-miru]
Pfffrt.
Miru is now sixteen months, and she’s adorable. I think I can’t find the words for it, which is a wonderful irony because she is getting more expressive every day. I’ve been meaning to write this for a long time, and I have the feeling it might already be outdated because Miru is developing so quickly and will have surpassed the basic communication that I have experienced.
It has not been easy for me being away from my wife and daughter for five weeks, and only see her on a small computer screen. She recognizes me, and says “apa” while touching the image of my nose on the screen in her room, far away in South Korea.

It has been about two months ago that I saw her imitating me making a pfffrt-sound by pressing my upper lip against my nose while breathing out. I was amazed how she knew how to do that herself, using her own upper lip and her own nose. I found pfffrt eloquent enough and a suiting commentary to the human condition, but it might be our artificially sweet popular culture that requires me to think that. In any case Miru making that sound as an answer to me is one of my dearest memories.

After five weeks op separation from his daughter, this father is already writing about memories rather than experiences. He has consciously created such memories, such as the one in the playground in Madrid in front of the apartment complex where our Couchsurfing host lived. Miru loved the slide so he put her up there again and again like in an old black and white comedy reel that keeps repeating itself. Infinite loop. The father recorded the memory for later use. 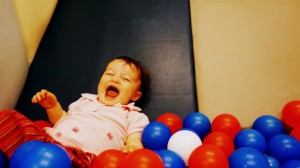 And he used it on several occasions during his miniature Odyssee through Western Europe, invoking the imagery of that toddler sliding down in ecstasy, discovering her own boundless infant world. That memory prevailed. The smile became more expressive while the faces of the other parents disappeared along with the benches, light posts, the buildings in the background, the whole context. What remained was Miru’s smile on the toboggan, her getting up on her feet at the bottom of it and her flying back up.

That mnemonic carousel of slide and smile and repeat: has kept the father warm at night during some long walks under the naked skies of Portugal. A baby in her purity, not yet bludgeoned by the dangerous stage of critical inquiry, sliding down the endlessness of her rapidly expanding world, the smiling essences of a human being, the purest of pleasures as there is no pleasure seeking, just presence, a presence chin-supporting thin-blooded philosophizers call “absolute”, an icon of a baby, effortlessly formulating that infinite wisdom that surpasses so greatly our conscious stammering: pfffrt.

The father will see her again in two days, and he has prayed not to Mecca but to Mnemosyne never to be parted again.