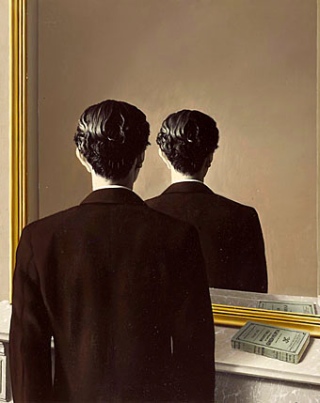 Still short of the 100-days milestone, a big event here in Korea, we’ve seen Miru developing some skills well before their due date. She can lift up her head entirely, she can put her hands together, she grasps things, she smiles spontaneously – and is fascinated by her own image in the mirror.

She reaches for the mirror with her fingers, and answers the smile of alter ego in the mirror. Her parents stand behind her, observing, fascinated as they are by the idea that their child already appears to distinguish herself from the world. They show her photos and videos they took of her, and imagine that her cooing and smiling at the little screen means she’s consciously watching herself.

The so-called “mirror-stage” according to the original theory by the early Jacques Lacan, started at six months – and there has been no scientific evidence of this theory. Experiments have shown self-recognition not earlier than 15 months. From a different website: “The babies all learned to recognize themselves in the mirror and wipe off the lipstick sometime between 9 and 24 months of age.”

We know it’s all in our heads, and not in hers.