Joy Valley is a struggling extremely poor orphan home and informal school in a slum area of Nairobi. Children are underfed, the school is treatened with closure by the government.

We visit the orphan home several times, sensitize the children, and support money for sustainable income generation: a chicken coop, a sewing machine.

Jared Otieno Ogutu is a transformed man. When we sit together in his small dark office – electricity has broken down – he tells us about his past as a man with low morale spending most of his time in nightclubs. Until he met the lord, perhaps because the car accident he had in 1990, which cost him his left hand, made him thinking. His transformation could not have been more radical since now he is the humble director of this orphanage. Jared looks much older, but his is only 36 and the father of seven.

Just today, the police brought in a newborn child that had been left alone on the roadside, probably by his prostitue mother. It was brought without further explanation because the public servants just wanted to get rid of it. I saw it sleeping peacefully in the community room.
There are people who exploit the generosity of foreign donors to their own benefit, much to the detriment of honest charity organizers since donors are becoming reluctant to give. Once more we realize the importance of the principle accountability, and put it into practice.
This orphanage had been built up by donations of friends. There is no government funding. Staff members earn 5000 Kenyan shillings a month, not nearly enough to subsist. But somehow they manage to keep going.
Jared shows me the kitchen, where the food is prepared on three woodfires. The thick smoke is almost unbearable but they have to cook like this. They are preparing chapati, a welcome dinner
The Children’s Rights Event: Our show
At about two in the afternoon we gathered the children in the small courtyard of their orphanage. Willys had prepared some sheets with the main terms we were going to explain them: child abuse, mental, physical, drugs, hiv, sexual. He is an experienced community worker and easily catches the attention of the children. We have divided them in groups of five, the head of each group took notes of what Willys explained. All I had to do was take pictures. I was asked to explain something about physical child abuse myself, and after greeting the children I stuttered something like
“If somebody, anybody, hits or kicks you, no matter who, no matter why, no matter how – it is WRONG and you all have the right to be protected. So please tell your teacher about it so we can take action.”
It is perhaps the core of our job as sensitizers, to make sure the children don’t buy the excuses their ‘bad uncles’ come up with. They have to recognize a thing traditionally called ‘discipline’ as a case of child abuse. 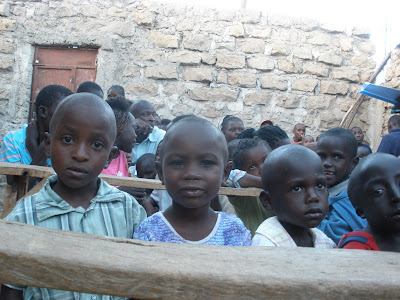 And then… the movie
After the session, we invited all the children in the central room of the orphanage, which measured perhaps three times three meters. But we managed to gather eightyseven(!) kids in there and get them all focused on the screen. I was showing them a popular children’s movie, Ice Age 3, and during the breaks we were linking the adventures of the animated heroes to what we had taught them before. A friend translated the relevant part of the movie into Swahili. The children all loved it, and I think we’ve created a lasting cherishable memory for them, as we did for ourselves. 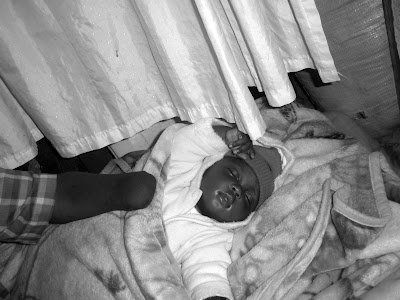 A follow-up
Mr. Ogutu has shown his sincere commitment and accountability, and Charity Travel is convinced of the neediness of his orphanage/school. So we decide to visit him again on January 26th, 2010, and we deliver another 13,000 KES for schoolbooks, poultry keeping and a seperating wall between two classrooms as the City Council of Nairobi demands. If schoolbooks and wall are not built in time, the City Council might close the school, condemning about 200 children to the hardships of streetlife – taking away their future.

The Joy Valley school is a nonformal school, meaning that children don’t have to wear uniforms and can finish their elementary grades at a later age. We visit in the morning, and see the different classrooms, where teachers are working semi-voluntarily (their compensation amounts to about 3,000 KES).

We have a good talk with Jared and hope that we will be able to support his cause more.

What Joy Valley needs
To give you an idea of the expenses the orphanage has, and of possible future purchases, I compiled a short list:

The income generating activities are especially vital to make the center operate in a sustainable manner. Joy Valley is open to new creative initiatives.