Taking a taxi to Amman requires some patience if you are on a budget. The driver will drive seven times around the block to pick up more passengers, sticking his head out of the window and shouting to the yellow city limit cabs “Amman! Amman!”. He offers me a more timely departure for triple the money, but I kindly decline. I’m listening to some mp3 stuff anyway to evade boredom and driving around in circles has a certain philosophical sexyness (lacking a better word). 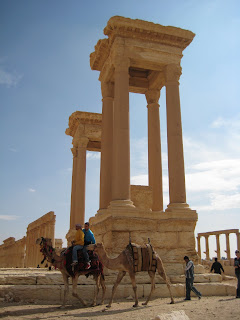 The border crossing is not too hard. My driver lets me carry his cigarettes on my name again. If all the authorities would be connected, the Jordanian border police could inform the Dutch consulate in Amman, they could send it to the health authorities in Holland, who would contact the German insurance company I am registered with, and they would increase my contribution big time. And you know what? I don’t care if it comes this way! We’ll always be able to evade the system. But let’s be realistic: authorities are very far from this level of interconnectedness. The Israeli authorities won’t even google me at the border!

We drive through the dessert and suddenly we are in the city of Amman, as rich in history as is Damascus, and a good atmosphere. I take a taxe to Jeffrey’s apartment and meet a friendly gentleman. We talk a bit before going to sleep.