Do you like my tone? Or does it sound too much like atonement? Well, you can switch me off, just like a television, you know, the old ones, that still had a big button on them. I wake up today in a four people dormitory and decide to walk around Damascus.

The National Museum offers some distraction and I walk through the well-kept sculpture garden, with plenty of stone treasures, tiles and tombs. 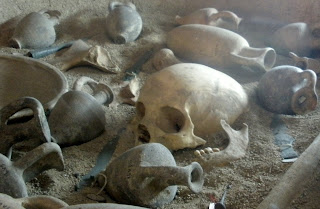 They have beautiful vases and I gazed at them through the glass. 18 century it said. Before Christ, I assumed since that was the usual dating in the other hall. And I felt amazing! How could the enamel be still so bright?
Those hues, these shades of blue and dark yellow. I am facing an almost 4000 year old treasure, no wonder that it’s behind glass. I didn’t know their technique was so advanced and wonder how they could be conserved so well. Then I looked up – it was the hall of Islamic art, and I quickly realize my mistake. The pottery is from the 18th century (12th according to Islam) AD. Interesting though that through this misunderstanding I managed to throw much sharper and more scrutinizing looks at the vases. So here is a lesson to science: sometimes we must live in self-induced ignorance in order to spur our scientific enthousiasm.

At night I feel not welcome in the hostel, and want to leave town. A man on the street however, is helpful and lets me a call the number of a couchsurfer, a Kurdish guy called Hasan. He is amazing, comes to pick me up at my hostel, and shows me around. Returning the favor, I invite him for dinner in the old town, in a restaurant located in the oldest building of the city. We order some traditional Arabic dishes and it is delicious. We go home and meet his two brothers. They are living here to study English language and literature, and it is a delight for me to converse on a higher level. We have a good conversation about various topics, linguistic and political. At night, Hasan takes me to a bar to dance with some Syrian girls. But… there are no girls around. We sit and have a beer, I toast to an independent Kurdistan and joke that I’ve never been in a bar devoid of members of the opposite sex, where the guy next to me wouldn’t put his hand on my knee. We laugh together and I know I’ll remember the night.