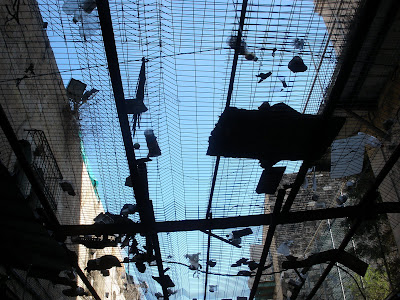 Sorry I get carried away by emotions here. So I explore the old town of Hebron some more, enter the reason for the terrible misconduct: the religious complex of the Ibrahimi mosque/Cave of Machpela. I have to cross a checkpoint and then I reach the smiling soldiers of Israel. Inside the mosque I see jewish religious scholars. What they do makes no sense to me, but you probably know that already. If there is a God, let him be a God of goodness. And if there is a God of goodness, let us too be good. The children that were my guides want my money. They have not mentioned it before and I was naive enough to think they were interested in me and my journalistic effort here. Oh how much I hate it when they ask me for money, reducing themselves to beggars in my eyes and reducing me to a sack of money. I argue with them, saying that I perceive them as a friend and that you shouldn’t give friends alms, but they don’t understand. I curse the situation and give them ten shekels. I must go undercover and try not to look lie a tourist. That involves a complete makeover including a dirty blanket wrapped around me, limping, a dirty unshaved face, and old hat, ragged pants, and glasses that look old and broken.

The TIPH(Temporary International Presence in Hebron) has been called for by Israel and the Palestinian authority. They are independent observers that report about the situation in Hebron since 1997. After the massacre in the religious compound (where Abraham and Sara are buried) by the settler Baruch Goldstein on 25 February 1994, the UN security council decided for that international presence, as part of the Oslo agreements. I run into a group of TIPHers and ask them what kind of observers they are. They give me a brochure and wish me a good day. Let’s read that brochure.
“The reports are not public. They are legally assessed and presented with questions for clarification to the Israele Defence Forces and to the Palestinian Police Forces. TIPH follows up violations in order to receive a satisfactory answer.” and “TIPH communicates its findings […] also to the member states which can […] use diplomatic channels to widen the dialog concerning the situation in Hebron.” Do you taste the bureaucracy? “Several points in the agreements have been breached [and] the work of TIPH has been interfered with in different ways during the years. […] Since 2005 the Israeli army operates over the entire area in violation of the agreements.”
The agreements are thus not backed by any sanctions. I might be naive but I know so much: any agreement not backed by serious sanctions is not gonna work in this country.

Now listen here: WHAT I CALL FOR IS THE PERMANENT PRESENCE OF TOURISTS ALL OVER THE WEST BANK AND THE GAZA STRIP TAKING AS MANY PHOTOGRAPHS OF WHAT THEY SEE AS THEY POSSIBLY CAN AND PUBLISH THEM WHEREVER THEY CAN IN ORDER TO MAKE THE PUBLIC AWARE OF WHAT IS HAPPENING THERE.

On my way back I talk to a shopowner who tells me he knows a poor woman. So instead of buying his book about Hebron I give some money to this woman.
“But i need a photograph for my website.”
-“You can trust me. I am a Hadj and look, here is the Qu’ran.”
He takes the holy scripture, holds it before him and puts his hand on it.
“Can I also put my hand.. I guess not…”
-“No, then I should wash it. You are not a muslim.”
“Ah.. sorry… I understand…”
-“I swear on the Qu’ran that I am telling you the truth. I will give these 100 shekels to that poor woman.”
In that moment, that woman appears on the scene. It feels like Allah has arranged this, doesn’t it? I give her the last 20$ bill I have and take some pictures of the shopowner who is well-known in the old town of Hebron.

I have seen enough here and take a bus to Bethlehem, where I arrive in the darkness and walk into a church that I mistake for the Nativity Church. A friendly man shows me around and tells me about the “Daughters of Charity”. I quickly take a few pictures and ask the questions I need for my fact sheet. The reason why I support them is that they help people irrespective of confession. Every year they provide shelter for unmarried pregnant muslim women, whose life is of course severely dangered because of the barbaric aspects of that religion I found myself not writing about sufficiently.

Then I head back for Jerusalem and meet Ella again. I tell her some of my stories and she agrees with me. Her government is terrible.