The plan for the morning is to visit the Al Aqsa mosque, but I am too late, and Bill Clinton is there. They shut the compound down for normal visitors and so I have to turn around. I run into two young women who are doing a field project as part of their international relations study program. We walk up together to where they are supposed to have a meeting with some organizations working in the field but we can’t find the place. So we decide to have lunch instead and exchange contacts.

I take a bus to Ramallah where Sami has been waiting for me for too long. I feel sorry. He is an amazing guy and tells me his sad and noteworthy story over coffee. A few years ago, Sami started to “do peace”, talking about the importance of a peaceful solution to the conflict to many people, including Jewish friends from Israel-proper (if that is the correct way to call it. What I mean is the territory of Israel outside of the occupied territories on the West Bank). One day, he invited friends over to his place to show them how the Palestinians live and share thoughts about peace. Somehow, the Israeli police found out about it and Sami was arrested. They imprisoned hem for twenty days, twelve of which in solitary confinement, and he was tortured. They burnt his arms with cigar butts and hot metal objects, they cut him, they tied him up to the wall, handcuffed. He still suffers from nightmares as a result of this inhumane treatment. I have seen the scars on his arms. (I don’t mean to stir up emotions and politicize over the issue, I just want to get attention for the brutal violation of human rights).

When he got out of jail he quickly learned English by himself, because he needs to communicate with the world beyond Israel.

His father is working for a construction company in Israel, and comes home only in the weekends. At the same time, his own house has been put on a eviction list, along with 47 other houses in the village. Officially because they are built in arey “C” which means the Israelis have both military and administrative control over the area. The agenda of the settlers that are pushing for this destruction is that they want to keep the Palestinian village small because they don’t like the sight of it from their hill. 100 Thousand square meters of land has been taken away from the family ten years ago, that had bought it before 1948. 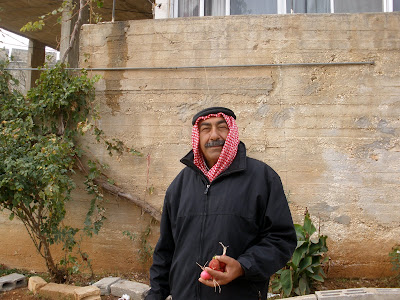 His cousin has been sent to jail for five years to intimidate the community. The official reason: he was picking olives on the land that had been taken by the settlers. A friend has been held in prison for ten months. One of his brothers has been beaten to permanent disability.

Sami himself was threatened that some “lost bullet” would hit him if he didn’t cooperate and spy on the people in his village. He refused of course and has been harassed by the Israeli police ever since.

Now THIS MAN is initiating Groups for Peace. Together with Ibrahim,  – whose eleven-year old son Yasan was killed by an Israeli car six years ago – they organize weekly meetings to work on peace. The Center for Peace exists since 2001 and has twenty volunteers, that teach the “culture of peace” to children from the village and neighboring villages. Foreigners are welcomed, too.
It is important to understand the importance of such movements. The only Israeli people young Palestinian meet are the most extreme settlers that occupy the land closest to them, and the soldiers at the checkpoints. It is vital for the peace that this situation changes.

Sami and I take a bus to his village, where I am introduced to his family. His brothers and his mother are really great people. There is a barbecue at night because they have a guest – me. I feel very honored and we have a great time together. I sleep in the room with Sami and his brothers.