Africa Asia bar Berlin Buenavista Buenos Aires Cairo Cambodia Cartagena Charity Travel children Delhi education Egypt essay healthcare Helsinki hitchhiking India Jack Johannesburg Kenya Kisumu Korea Laos Lisbon Malaysia Middle-East Miru Moscow Nairobi old town orphanage power refugees resistance Russian Santiago Seoul St Petersburg Thailand Tiruvannamalai transsiberian Vientiane Vietnam
Browse: Home / 2009 / August / August 12. Poor girl.
I’ll be writing about the awe of being; hence I’ll be fine. Hush, hush! Make it denser, perhaps even by adopting a story line. Write with passion, write with heart. Do I envy Jonathan Safran Foer and his brilliant girlfriend Nicole Kraus? They find recognition, the press praising you to into the clouds and beyond? What is this “genius” after all as the target of so much appraisal. It is about portraying human beings with their awe and their intentions, with their dispositions, sufferings, flaws. But it is the reader who does the job. I despise the system of literary critique, praising some books with a battery of superlatives and burying others under crude and bitter reviews. After all, we are just talking about stories, stories of people, people that are gonna die, people like you and me are going to 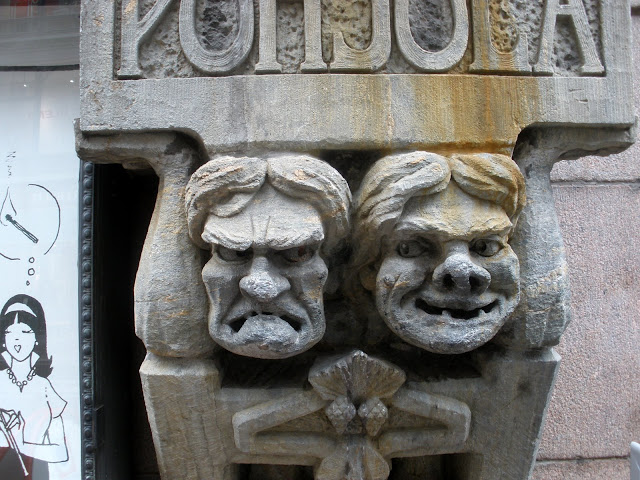 die, stories written down in sincerity, stories written down because the writer wants to share his reflection on the awe of being with other people. Perhaps he fails because his text is not able to convey what is sensed. But that doesn’t mean the text is bad, it only means it has not found its audience yet. So, then, in my despisal of the world of “literature” with its rich bobos, hot showers and farfalle-pasta, in my despisal of that world I am seeking CONSEQUENCES. I might never publish anything because I don’t want to enter that world. I will just keep blogging, there will never be copyrights on my work, I don’t care, I won’t make money nor fame, I just want the words to be out there somewhere so that they have a chance to find their audience one day. And if my friends – I believe them – stop telling me they where tickled or stricken by my words, I will continue. Money is another problem, but that can be outsourced.
The poor girl doesn’t know what strikes her. It is fun talking to me, everything is fun fun fun for her, eyes blue like still elevated mountain lakes and a smile to justify another Trojan war and everything is fun fun fun – she does exactly what I have hoped for she shows me she is not able to say one sincere no to a playful idiot who traveled around the world to suspense seeing her again waiting for his mad love to go away, but if it doesn’t disappear he wants to see her in order to make it go away, and at that his is very successful, he is telling her “I have to demystify you” and gently striking her hair, “no that’s enough” she says, “thanks, it has been enough, now you are no saint teresa anymore” and I can move on. It is all played. How deep can you play, play against loneliness I guess? That is a question. How long can the semantics of PLAY hold the siege of the semantics of finiteness, finality or death? Who wants to write a theoretical study about this sticks up his finger. For me it is life as literature, literature as life, and I am proud when nobody is hurt in the process. So this girl, I meet her for a cup of coffee, has a way of denying that fills me with disgust. But that is more effective than sweet denials.
Being denied by the Other has become part of my life. It’s part of the game, little invitation of death into the void of my poetic soul. Playing! Writing the most astounding, heart-breaking, overwhelming stuff and smile through them like our sun through the clouds. Playing a jolly Jesus and making the people show THEMSELVES how they are coping with the absurdity of life only by piling up more absurdities on top of it. Society is a stinking pile of absurdities, layer after layer evolved from our inability and disability to cope with the absurd in any other way. DO I ha have proof for that? C’mon, gimme some proof. I am picking my nose right now there you have your proof. I would like to write about something else, after all, the mockingbirds will still sing after you and I are gone. I read (present-tense-verb!) about Albert Schweitzer, for instance. He decided to study medicin when he was already thirty and thirsty for the Good. He was a distinguised theologian, organ player who had written a well-received book an Bach. He just wanted to help humanity, went to medical school and three years later he was a doctor ready to go to Gabon, Africa. Being a stubborn character, not allowing the pragmatic to overcome his dearest preconceptions, he is not me, but I see him. Still I can learn from him. I am not going to be a doctor but in inspirator. After all, my training has been in philosophy and Socrates understood himself as a midwife of the soul. Then Schweitzer encountered trouble with bureaucracy. In WWI he was brought back to Europe by the French because he had a German passport. His protests didn’t help, he could explain he was the only doctor and working for French missionaries – they still didn’t let him and his wife in peace. During WWII he could continue working in his hospital, he gained fame and funds started to flow richly. But when he threw himself up as a harch critique of the nuclear bomb, seeking the public and using his influence as Albert Einstein had suggested. Now the CIA and FBI were keeping a dossier on him, his sponsors stepped back because they too were investigated by the secret service on account of being involved in anti-american activities. It is better to be red than dead, Bertrand Russell said. Anyway, media tried to to Schweitzer harm by writing negative articles about his little hospital. But he stayed there until he died in his eighties, surviving his wife. An inspirational life story for all of us. Are we ready to confront earthly authorities in the name of our ideals or is drama dead?
I take the ferry to Tallinn at 11:30 and try to hitchhike back to Berlin in one giant leap.