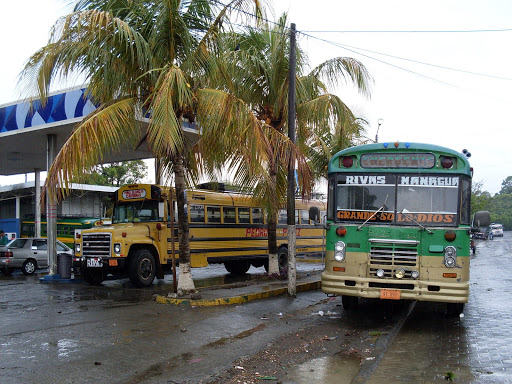 The “Nicaragua Inn” next to the Pali in Rivas is the only place in town where they serve the kind of breakfast I feel like. Coffee and toast with marmelade. The 6:30 bus has just taken me here, and I’ve enjoyed the ride a lot. Zooming through the countryside on local buses, breeze in my face, cows crossing the road, loud music, smiling people, candy vendors, it’s one of the top attractions of my journey anyway. Rivas is a typical Nicaraguan town: a big active central marketplace it has, and a lot of horse carriages. It’s drizzling when I ask around for my European breakfast, and helpful hands point me the place where I write some five hours. I will continue my voyage in a bus to Granada this afternoon. In the bus, I will eat crispy fried banana and coconut pastry. Granada will be a friendly-looking town and an affordable hostel is easy to find. I will end up in a gringo hostel called “The Bearded Monkey” run by a friendly Belgian man. At night, I’ll have a cocktail at the hostel bar mixed by Dave. It will taste delicious and I’ll ask for the recipe to publish on my blog.

The “last big novel” has already been published. According to Milan Kundera, who still doesn’t give interviews but re-enters the literary scene in the year of his eightiest birthday with some essays, Garcia Marquez’ “cientos años de soledad” was the apotheosis of the novel as such. Its proponents don’t have children; they are the tragic end of their ancestral line. “Great stories” belong to the passed, according to Lyotard, it is time for a whole new kind of philosophy that plays around conscientiously with the broken mirrors of the old, something like that. But behold! They forgot about us. To be frank, I can’t stand the boisterous arrogant bombast of the “ultimate”, it makes me feel sick. And it’s so wrong, too. Wasn’t Aristoteles the last big theorist; wasn’t Cervantes the last big novelist; wasn’t Shakespeare the unsurpassable dramatist; wasn’t Dante the ultimate Poet? And Bach the absolute musician? And yet, long after their deaths other giants have lived and died. Goethe, Schiller, Voltaire, Molière, Kant. Every epoch is its very own culmination and nothing else. What I’m worried about is that once upon a time a generation won’t accept the change of guard. They’d rather kill their own offspring than accept that they are themselves just insignificant dust and not a royal pathway to anything higher.