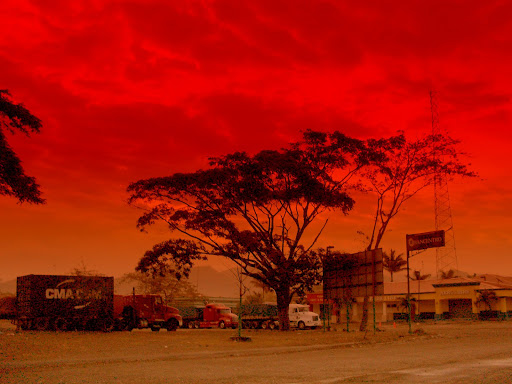 Happiness suddenly strikes me (like a warm gun) when I have breakfast in a tiny San José lunchroom. Over coffee, juice, eggs and toast I dream away. The heads of the people here are taken from a movie. I can’t remember which one, but they definitely appear in some movie. Perhaps it’s The Gothfather, or Scarface, or One flew over the cuckoo’s nest, or The Wild Bunch, or Casablanca. It makes me feel I’m part of something.

I am singing “Dancing on the rooftops again / dancing with nothing but life on my mind / dancing, oh dancing again “. Are we pleasure machines?

When I return to the tristeza of the hostel, I see an accident. It has occured just while I was eating. A car lies upside-down, firefighters and police all around. A person is taken away in an ambulance. It has happened in the half hour I had been eating my happy breakfast. You can be all supersticious about this kind of thing. I could have returned five minutes earlier, to save a life perhaps, or to be hit by a car myself. I don’t stay at the scene of the accident for long, I want to leave this country.

The Ticabus fare is too expensive, twenty-one dollars. Being stingy can be a means to generate random events, and that’s its only justification. So I walk around downtown San José asking for other bus companies. Eventually, I find a bus to Puñas Blancas at the border with Nicaragua. For the second time (the first time was my ticket from Asuncion, Paraguay to Santa Cruz, Bolivia) I had exactly enough money in my pocket for the trip. You can be all supersticious about this kind of thing.

I thought over the itinerary of my future journey during the long bus ride. It’s one of my favorite activities: looking at the countryside from a slow local bus and reflect about my itinerary. About future possibities. I can be all caught up in the possibiliy business. I think that’s not a bad thing for a literate.

Late in the afternoon, I arrive at the border with Nicaragua. When I get off the bus, money changers flock around me and almost force me to use their services. I can’t think clearly and give one of the “money changers” who presents me his “ID” a twenty dollar bill. I get way to little Cordobas for it (240 instead of 400) and it’s frustrating. I discoverd the rip-off aht the Nicaraguan border post 500 meter down the road and walk back. The scum had disappeared and I all can do is inform the uniformed men. Yes, he wore a white shirt but I can’t remember anything else. Frustration again. Frustration makes me think frenzied. I am fed up with the whole thing, and I overdramatize it. I tell everyone I had been robbed. Robado, robado. No tengo nada. I am not interesting for you punk, they have just sacked me so take a hike. I lost only seven dollars to the money changer but behave like I’ve just been castrated. When I’m even offered a free drink with my meal, I feel a bit guilty about the lying business. This is not right. I’m a rich guy around here, I shouldn’t pretend that the small-time rip-off brought me down. Here’s some morale to work on. Fine, I mean, to have identified it as such is a first step.