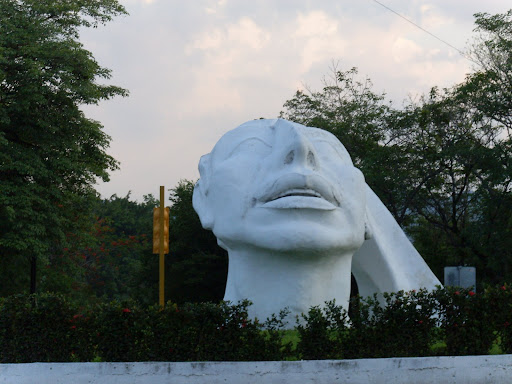 In the morning I visit the temple complex of Palenque. It’s thirty minute walk down the asphalt road and I’m very sweaty when I enter the site, that lies on a hill. The temples here are amazing, at least on a par with Tikal. When I walk around, I have the feeling I’m in the thriving Mayan city some 1200 years ago. I was right yesterday: don’t need the mushrooms. Imagination flows like magic incense – all by itself. There is a tomb of a lady that you can enter (I mean the tomb), a large complex where you can pass through the interior below, and a high temple with a beautiful view of the Gran Plaza, where I will take a picture of a French woman while she jumps on her hands and flips over full-circle in front of the temples.

I go back to the same café as yesterday because I left the cable of my computer there, which is quite an essential part of my belongings. Fortunately they still have it. All kinds of scenarios play through my head. Why worry so much? Faith, faith, faith, and then a good cup of coffee – I jump on the bus to San Christobal…

… and on the bus I learn about this region of Mexico from an anthropology student called Biri. She is working with small communities. She will show me a cheap place to stay where I leave my backpack before we hang out at the mean Cathedral square. Yesterday night, I have suggested Myriam and Mario to meet me in front of the Cathedral. My expertise of Catholicism comes in handy at this point: I know that there is at most one cathedral in a city so I suggest do meet right in front of it. And if that’s not enough, I suggest him to stick a note to the front door of the cathedral in case I would be delayed so I could find them at their hostel. I don’t know if Mario is familiar with Luther, but I thought it is a cool idea. It doesn’t work out though. There 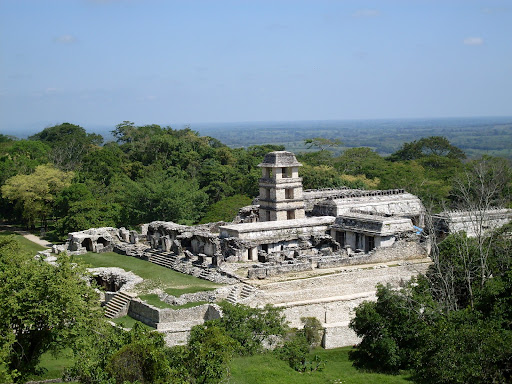 ‘s no note on the impressive 20-feet oak door but I meet the group of anthropology students dancing to the boiling rhythms of African drums. It’s a nice night on that main square, but I’m tired and go back to my hostel, thinking about some more nonsense I could write just to get the point across.

“Friends” is very popular. And also, it features the ex-girlfriend of Brad Pitt, who is very popular, too. So I decide to write my own episode of Friends. Enjoy:

Bloom and Marcel are standing in their living room, each on one side of the couch. They are about to leave the house, but something keeps them from doing so. Bloom scratches his head and says
“I think I forgot something.”
Marcel looks at him and shakes his characteristic head slowly.
-“Aren’t we all doomed to forget the most defining events of our lives? To forget the smell of beloved lips, to forget the unique nocturnal sharing of our deepest truths with the person we love most, to forget the look in the eyes of our mother, to forget the sound of the little birds looking for food on the windowsill in our lofty étage in de Rue de Capuccines, forgetting the taste of a fresh Madeleine in the Deux Maggots, crumbling on our tense lips with infinite serenity, to forget even the forgetting. Yes, aren’t we doomed to live our lives in a tragical, sad search of what is forever forgotten, in a maze with black walls we see glowing dimly only because we shine our foolish lights on them?”
“Hahahahahaha!” The laughing comes from the audience. Hey, that’s YOU!
Bloom scratches his head again.
-“Good point. We are here to unfold the story that we carry inside us, to unveil the inevitable truth that defines us but is bigger than ourselves. It is our meaningless task on earth. We will arrive at something, at some layer of meaning we can indulge in for a little while, ignorant of the emptyness. For how long? Ten years? Twenty years? And then we’ll meet our own emptiness again. It’s a relentless vacuum sucking everything with a purpose, an intention, a direction, a ‘dream’ as you would say, everything behind its odorless jaws”
“Hahahahahaha!” There you go again.
“What did you forget Bloom?”
-“Oh, just the keys of my car. I think I left them at Franz’s place.”
“Franz’s?”
-“Yes, we were there last night, don’t you remember?”
“Hahahahahaha!”
“Franz invited us to see some movies together. You were so drunk Bloom, just like every Irishman.”
“Hahahahahaha!”
-“I’m not Irish. My family is Irish. I’m Italian.”
“Hahahahahaha!”
They still stand each on one side of the couch facing each other.
“You were so drunk Bloom, believe me. I bet you don’t even remember what Franz looks like.”
-“But I do. Franz has dark hair. I think he is Jewish.”
“What does he do for a living?”
-“I think he is a clerk somewhere.”
“You remember that? How can that be? You were totally knocked out.”
-“I have no idea.”
“Let’s call him to come over and have a drink or something. You do need your car keys,too.”
“Hahahahahaha!”
-“You’re right. Without those keys I’m pretty much stuck here. And I don’t want to be stuck here next to this couch in this murky living room, believe me.”
“Hahahahahaha 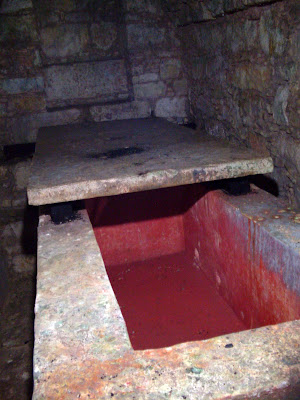 !”
Bloom calls Franz. Marcel is watching him. The swift and eager movement of his fingers over the keys of Bloom’s phone excites him. This is a moment that will remain alive in his thoughts for a very long time. Bloom’s fingers are typing Franz’s number on that little telephone. They seem to have a kind of magic that Marcel can’t resist. He sighs
“This is too beautiful! I could live for this beauty alone, Bloom.”
-“I could not.”
“Hahahahahaha!”
“So what did Franz say?”
-“He says we’re welcome at his place to have some wine and talk. He’s having some kind of party.”
“Let’s do that! Who else will come?”
-“Virginia is for sure, Ernest might show up with a bottle, Samuel is delayed. The rest I don’t know.”
“Hahahahahaha!”
“Cool. Yes, let’s walk there.”
-“Walk?”
“Yes, you forgot your car keys. Already forgot about that?”
“Hahahahahaha!”
So Bloom and Marcel walk twenty-seven blocks to Franz’s place and knock on his door.

“Come in, come in, make yourselves comfortable, grab a chair, make some coffee. So, Bloom forgot his car keys again?”
“Hahahahahaha!”
-“Yes… We don’t want to declare it to the police because the bureaucracy and the paperwork would take years.”
“At least. I know that since I’ve been through some of that myself.” Franz says.
“Hahahahahaha!”
-“Good. Where could the keys of Bloom’s car be?”
“Maybe here, under the table, or here, in the closet, or – where have you been Bloom?”
-“Maybe in the…eh… bedroom.”
“Hahahahahaha!”
“You can go have a look.”
Bloom and Marcel tiptoe into the dark bedroom and sees that someone’s sleeping there.
-“There’s a person in the bed.”
“O I forgot, it’s Virginia. Don’t mind her, she’s cool. Just look for the keys where you remember you’ve left them.”
-“I can’t remember a thing.”
“Hahahahahaha!”
Bloom pulls the sheets off Virginia and sees that she holds his car keys in her closed fist. She winks at him with an intimity Marcel would have written at least a thousand pages about if he would have noticed it.
“Hahahahahaha!”
“Should I wake her up?” he asks Marcel.
-“And I’ll make some coffee” Franz mutters in the background. Marcel looks at her small hands holding the keys and says
“Isn’t that beautiful? Life is so rewarding if you look at it this way.”
-“And if you don’t?”
“If you don’t look at it?”
“Hahahahahaha!”
-“Yes.”
“Then… I don’t know. Who can know that anyway?”
“Hahahahahaha!”
-“Take the keys”, says Bloom, “I’m going home. I’ve got some work to do.”
“Bloom takes the keys and drives back to his appartment. Marcel stays with Franz.
“This is such a boring day!” Marcel says to Franz.
“Hahahahahaha!”
Meanwhile, Virginia is waking up and tries to remember what happened the night before. She fails at that and sleeps for another hour. Marcel enters her room and asks her if everything is alright. Marcel is the friend she shares her most profound secrets with.
“Hi Marcel, I don’t know…”
-“You don’t know what?”
“I’m writing this script but I’m stuck.”
-“What kind of script is that?”
“It’s about two friends having a good time together, even though they are in love with the same woman.”
-“Are you the same woman?” Franz asks from the background. “And who wants some coffee?”
“Hahahahahaha!”
“I am the same woman” Virginia says proudly.
-“And I am the same man” Franz laughs heartily, but we are not sure if he has understands everything.
“Hahahahahaha!”
“I’m just too tired. I’m going to sleep now.”
-“Your work is not yet finished!”
“I apologize for that. But tomorrow I will be the same woman too.”
“Hahahahahaha!”
Virginia goes to bed. Franz lays his hand on Marcel’s shoulder and says:
-“She’s gone to bed now. And soon the birds will come to eat off her windowsill.”
“That’s so beautiful. Birds on a windowsill. Birds! A windowsill! What else do we need in life? Isn’t all the beauty present in that little scene? What else do we need?”
-“I can’t think of anything.” says Franz but he thinks of Virginia. He rolls his eyes.
“Hahahahahaha!”
“Neither can I.”
-“That is good, then.”