The morning and me, we have a very short meeting. She decides to leave after half an hour. It’s almost noon. Let’s have breakfast! And then off to the historical center to walk around and take photographs. That center is not big and quite orderly structured; it’s a good idea to explore it on foot. I notice that Parliament, Cathedral and Ruins are very close to each other and imagine they constitute three pillars of Mexico: democracy, religion, and history. It’s too hot to dig in that deeper. The Mexicans know what constitutes them better anyway.

At night, I enter the Centro Cultural de España, where a big guy checks my pockets. That can happen. They are afraid of aggressive angry men carrying a machete under their suits, hidden away behind their neckties. He makes me empty all my pockets and I do it
Oh, how embarrassing. No pal, I am embarrsssing YOU. Cause that’s how embarrassment works.

The 3D photos in the Centro Cultural make me think about eternal life. Those persons, long dead of course, that appear in the black-and-white pictures blend together to suggest a three dimensional image of a scene, they seem so alive, I mean, it is as if they are really walking there in that crowd, or sitting on that rock. I find it a-m-a-z-i-n-g but my treshold of amazement is very low.

I feel this peculiar type of happiness sitting there on that dusty chair, behind the flower curtain in the guard’s chamber. I’m part of a Play and the Play intensifies life. I laugh. Ssst, be quiet and close the curtain, make sure nobody sees you here, the guard whispers. He is not supposed to hide gringos in his little dark shed, gringos that are a little hopeless because they cannot enter the apartment where they are living due to a broken doorbell, gringos walking up and down the street afraid of being harassed in this dangerous neighbourhood of Mexico DF, gringos punching the metal door anxiously with both fists waking up all the dogs, gringos explaining their awkward situation to the patrouilling police officers that ignore him, gringos yelling and complaining and moaning and shouting and throwing little stones at the first lit window and – what happened? I came back from the party in the Centro Cultural de España – they had put a DJ and loud equipment in the top floor of the building and people danced wildly – at about 1:30am and tried the door but with no avail. So I walked around looking for a public phone that takes coins. The one I find has a coin jammed in it and I start looking for a metal pin or something to remove it with brute force. I don’t find anything. There is a party going on but it seems to be ending and won’t beam me into the safe light of the wee hours. So I speak to the guard behind the blue fence with the thick bars, and he accepts me after a short interrogation. I tell him it’s dangerous to sleep on these streets and asks him if he could just let me sit on his chair for four hours. What’s your job? – I’m a translator. Which languages do you speak? – Dutch, English, German. – Can you repeat your request in Dutch? – Het is gevaarlijk om hier op straat te slapen kan ik niet bij jou zitten. And now in English (our conversation is conduced in Spanish; I’m about as fluent as peanut butter now but we understand each other well)? Okay, pass. I walk through the gate, cross the parking space with the fancy cars and enter his round little chamber.
And so I end up on that chair in the tiny place where the guard of one of the richer people’s buildings was doing his time every night when I didn’t drive his taxi or 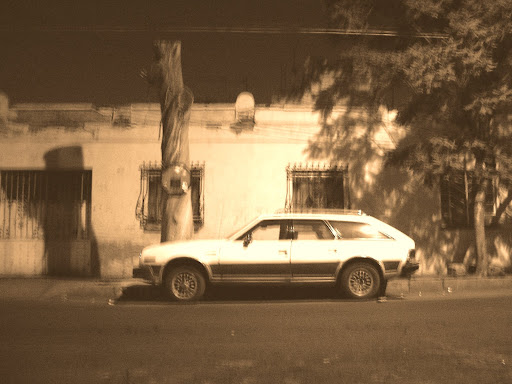