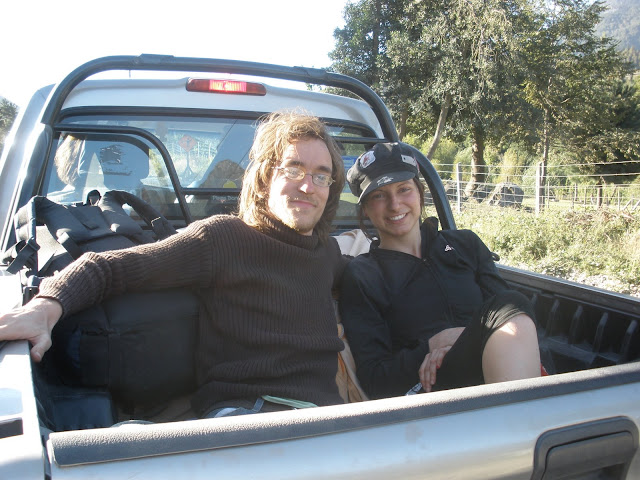 A day of full-blown hitchhiking excitement. We started off in San Martin, took a local bus to some place in the direction of Junin that threw us out in some barrio with dusty dirt roads and a beautiful scenery. We walked back to the paved road and stuck out our thumbs the way Chris McCandles did in Alaska. A truck pulled over and let us hop on. Seen from the back of a truck the scenery of the Andean Patagonia region is a dream. The volcano of Lanin appeared on the horizon and we gazed at it with delightful respect. This is so good!

Upon arrival in Junin, the last small town before the Chilenean frontera, we got off the truck and hiked a few kilometers down the road until we reached an intersection. Many cars passed, ignoring our dust-covered thumbs that must have appeared somewhere at the verge of their vision. It was damn hot and we walked with heavy packs, but that’s the way it should be. It is, in some strange paradoxical manner, causing us to call things perfect. We passed a casern, waved to the guards, footbathed in a small river, and arrived at a small police station where we picked up a bottle of water. A Spanish couple brought us from there to the Chileanean border. The Mapuche village on the way was not interesting. At the border, they had to turn around because they had no allowance for their rental car to enter Chile. We waited at the border control, which has a beautiful view on the Lanin volcano that we enjoyed. A 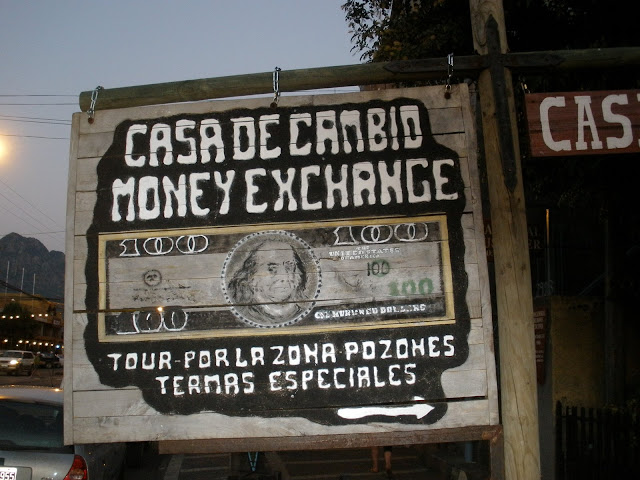 truck took us from there to Pucon and that ride, on a bumpy dirtroad down the mountain pass with great views and the Lanin volcano in a steadily growing distance, the Villarica volcano appearing in front of us as if they were two old friends exchanging smoke signals of affection, the small shacks behind the trees surrounded by chicken and sheep, the colorful mountain slopes edging the road, the weaving people – it was one of a kind. O how we enjoyed it.
We found a hostel with a fair price and a very comfortable matrimonial bed (we didn’t care we surely haven’t got the faintest intention of ever getting married). The place was called “El refugio”. We had some quick dinner and headed to the refugium of dreams in this new town.

Perhaps I dreamt. Say the word. The word is asphyxia. Enter the room. Look around. There are many people who look like you here. It should be comfortable but it isn’t. And that’s exactly why you’re here. They are going to cure you. I write this for people who want to read something else than X, something profoundly different from “I went to cool places and did cool things”. I write for people who are headed for the cross – that is of course, the clinic.