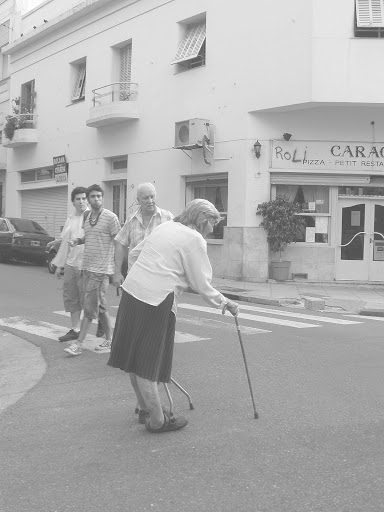 “Mi nombre es Cecilia si necessito cualcosa me llamas…” said the friendly waitress in the café where I write today. Writing in Buenos Aires is optimal. Firstly, it’s one of the worlds most literate cities, with an impressive amount of good bookstores. Secondly, the wifi cafés are plenty and affordable. Thirdly, the climate stimulates creativity. Okay, the last point is my subjective experience. I am working an a novel in Dutch in which the main character is called Martin. The café I write in today is called Martinez. When Martin travels to South America he is called Martinez too. The coffee tastes good here, a jarrito with a small glass of water stands next to me. I write for several hours, concentrating on a small ten-inch screen, destracted only by paired female jointed appendages covered partly by petite skirts. I like legs. But I like writing more. So I continue as the people pass the café in a mood I deem hasty. Why? I feel like something is protecting me. I keep surviving in this world where everybody seems to struggle. I just survive sitting here and writing my crap. It’s a scandal. It’s crazy. Something has to be done about it. Okay, this blog is not my only output, there are also serious things, but still, me sitting here grinning at sixty square inches of a computer screen cannot be justified by even the most brilliant of output can it?
Well, here in South America we don’t think so much of a justification. We just do what we do. It doesn’t matter, does it? What if everyone would think if they were allowed to try what they want most? Still, I cannot justify it. I am enjoying life and doing for no less than the full one hunderd percent what I want, so I don’t have any percentage left for a justification. It’s a funny mechanism isn’t it?

I walk around with a woman from Buenos Aires today. She is very big, five centimeters taller than I am, and she takes nice pictures of people who sleep on the benches in the belching metropole. We walk through a big park in Palermo and suddenly she has a thorn in her toe. It’s bleeding and it won’t stop. We turn around. She says she will visit a massage saloon and that will take two hours. Well that’s very interesting. I start getting curious about that treatment. Of course she wants to put me off and seeks a more subtle way of doing so than saying bluntly “you bother me”. Anyway, we walk back through the park and she takes a taxi somewhere tells me I can walk home. Illusions come, illusions go. And it is not at all a bad treatment to undergo this cycle at least a few time. Without the tall woman next to me I walk on and think about this recycling of emotions. In a way, it must be like a soup in our head, with all those ideas, imaginations, hopes, propositions, wishes drifting in a thick fluid. Shaking it up might not be the best recipe to cook up something marvelous, but it is definitely the first line of a very good recipe. What do you think, Jack? I miss you, by the way. And I like you again. I don’t need to ask you for forgiveness because I killed you. I know you are way beyond that. But Jack, do you agree? Is it good to have thinks shaken up over and over again in order to, well, preventing the need to shake them up over and over again? Do you understand what I’m saying? Sorry Jack, I didn’t want to bother you. And by the way, I think the emotional brewery in our head is an asset you are not entitled too.