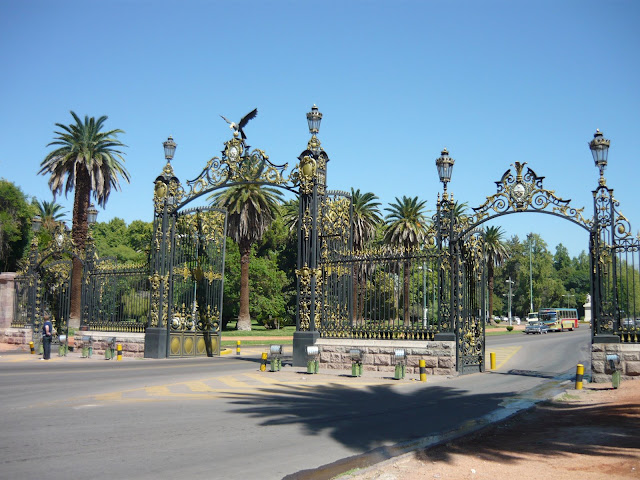 Pablo went out early for work, and we left with him. Still sleepy, we walked along the grand avenue of Santiago searching for a please to sit down and have a coffee. Although the city center was full of people, we could hardly find a bakery like the ones I am used to in Berlin where you can have a cup of coffee and a sandwich. I got a bit mad. What were all those people doing here, with all the shops closed? Cultural difference should be something funny, something that makes you go ah-ha and rub your curious chin. Here it only struck me like a fallacy, a freak of culture. Please do open the shops at times we are used to, and THEN you may serve the most exotic cultural differences, THEN we will be interested.

We took a bus to Mendoza at daytime. Ate something in the station. The bus ride turned out to be a good decision because we crossed the Andes on a very rough terrain near its highest peak – the Aconcagua is nearly 7000 meters high. They would just have to put a small pinnacle of human vanity on top of it to actually exceed seven kilometers. Uphill, towards the pass tens of large trucks crawled up the dusty roads, reaching 3800m at the Argentinean border control. We had to wait only for about half an hour and could enjoy the view. The old dilapidated railroad tracks that curved the grey mountain slopes formed a fascinating remembrance of earlier attempts to conquer the harsh Andean ridge.

Mendoza is a neat colonial town. The center is structured around a two block square with four orbital squares; the south-eastern one called Plaza Espana is the best. Check out the mosaic of colonial madness and the little tiles of Spanish weapons on the floor. Mendoza is very green like most Argentinean cities built in times when space was plenty. A salad in a fancy bar. We spent the night in creaking bunk beds – the blue hostelling international sign had called us in. Wine, papas fritas and a good night’s sleep.

Another reason for writing is conquering fear. Perhaps that’s also what Franz Kafka did. What is fear, anyway? The sensation we have when something scary happens, like in that funny shower-scene in the Hitchcock movie? The confrontation with an unexpected intimidating fact, or rather with the confrontation a fact that we are able foresee much more than we would like to be able to foresee that fact, or rather the gruesome shivering we feel in our spines when power is exerted upon us in a hostile manner, or rather when we look our certain death in its ugly grinning face when some of the fundamental Angst peeps through the stratum of our worldly ventures. Our life is a peep-show of death looking at itself. Fear, who are you? You are, like everything else, a way of exerting power, not its opposite. But such an odd way of exerting power, because it is not organized around the self. It is organized around the decomposition of the self. Those remarks are just for consideration, please do never take them for granted.