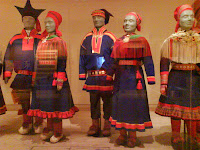 The next morning I went up early enough to walk my way to the Arktikum Museum and enjoy some time looking at the great exhibitions there (it won a prize for the best museum in Europe in 1994). I learned about the Sami people of Lapland, their clothing and how important it is for them to wear their brooches and scarfs correctly so that they are recognizable as people from their village.

There live about 7500 Sami in Finland. Nowadays, they blend traditional culture and modern comfort for example in carved wooden mobile phone placeholders. I was more impressed though by the skillful craft that was displayed in traditonal sleds and the famous Sami knife sheaths.

There was also a lot of information about the geological history of the Arctic region and Lapland in particular. I read about the ice shelves from the latest ice age, about the bog, the 500 kilometer long river Kemijoki, climate change (don’t forget I am environmentalist). 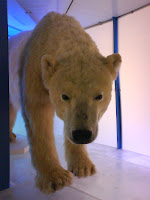 There were some stuffed animals too. I saw a polar bear, a very impressive elk standing about 2,5 meters tall, a wolf, and a wolverine (gulo gulo), which is a very endangered species.

They also had a video show projected on the ceiling of a dark hall about the Northern Lights. It looked like kitch, but was nice for kids. Some young Dutch boys I heard in the northern light video show seemed to enjoy the museum very much, commenting everything with their adolescent vocabulary of beer, violence, and painful situations.

At three in the afternoon I went home, and ate some noodles Veronika very kindly left for me. They had taken the car already, and we began our trip to Muonio, a small town between Rovaniemi and Tromsø. At first I tried to drive, but very soon I discovered that I am someone special: Not many people own a driver’s licence without actually being able to move the car 1 centimeter. I was just confused with the clutch and starting on a slope, but I still think it is quite an achievement having your license and not coming forward at all.

We bought some groceries at the supermarket and followed the long road from 19:00 till 22:30 that led us to Muonio. On our way, we were all amazed by a natural phenomenon three of us had never seen before: The Northern Lights or Aurora Borealis. It was a dazzling experience. 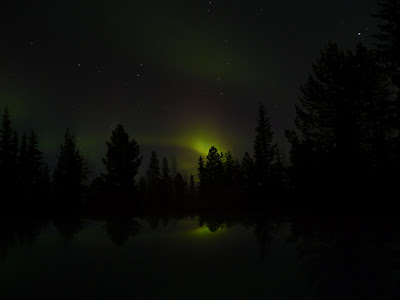 In Muonio we were hosted by Piita, a 21 year old girl studying Nature Guide (which means training sleddogs, hiking, sleeping in a tent with minus 32). My fellow travelers pushed me to dance like Michael Jackson again, which I obediently did, bringing them to a laugh that also tickeled my own mood, and we all went to bed with happy faces.

One thought on “The Arktikum and the Aurea Borealis”