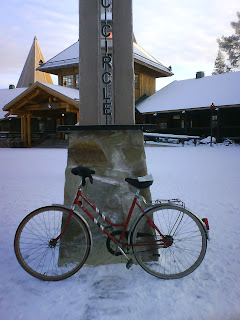 The next day I decided to revive the tourist in me that had almost died, and went to Santa’s village. One of our considerations in the bar the other night had been about the answer to the question why Santa lives in Finland. Since my companions studied law, I suggested there must be something like a “Santa Clause” in the Finnish constitution.

Anyway, I left Veronika’s place at about eleven on a small red bicycle, and rode through a breathtakingly beautiful white landscape to the village with Santa’s Office. When I arrived there it was all silent; it had the atmosphere of a ghost town. I was the only one walking around, enduring the music from the loudspeakers, and parking my bike with one wheel at each side of the Arctic circle. There are not many bikes that can say that. After lying down on the line, making pictures of the line between my legs, my legs crossing each other over the line, cleaning snow from the line, and other activities that gained their meaning from the fact that above this magic line there is at least one dark day in the winter and one day the sun never sets accordingly in the summer. I walked around a bit in Santa’s town, did not enter any of the wooden buildings but climbed a 40 meter tower instead, and produced an overview picture of the settlement. 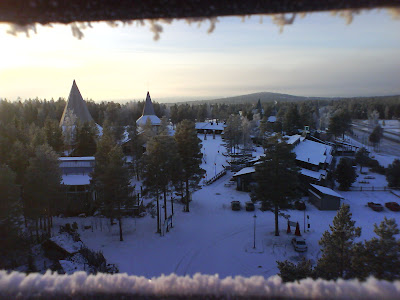 On my way back from Santa’s village, I saw a young girl with a pink plastic sled on her way home. I wanted to give her a lift. I tried to make clear what I had in mind with gestures, and then just tied the sled to the luggage frame of my bike, and pulled her for 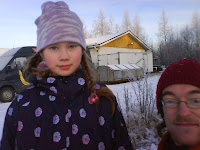 5 minutes. It felt great! This was Santa’s present to me, this was one of those magical moments in life people tend to remember when they are old. The girl said goodbye, and I continued my ride back to Rovaniemi. It was -4 outside and I was very glad that I bought a pair of woollen gloves in the second hand shop before heading to Santa’s village.

Back in Rovaniemi I went to the university, passing a few exceptionally pretty lakes, which photos decorate yesterday’s post. At the University I met Veronika, Johanna, and Tasos. For the first time, our travel group was complete. I wrote some pages in the cafetaria, and we went home together by bike. That night we visited the same bar as the day before, which was actually located in an old bank-safe. The thick steel door was still there. They played very very nice music, and I will call this phenomenon “telepathic DJing”, because it feels like you are the DJ yourself when they come up all the time with the songs you’d like to hear next. One of our favourites was Michael Jackson, and that did have a reason. We went home together, and I danced like Michael Jackson wearing – beware – only some grey long winter underware, thus looking incredibly “sexy”, to quote Tasos (who could know since he is a Greek). After Beat It, Billy Jean and Thriller, we rolled on the floor laughing, and rolled into our beds, dreaming about our trip to Norway. 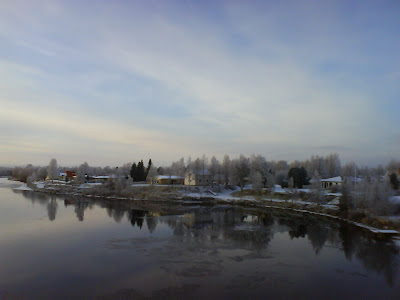