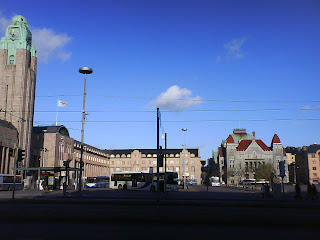 Another day started with a lazy morning and a tasty breakfast. I joined Ilpo to his office and decided to go to the Art Museum “Atheneum“. Before that I walked in another shoemaker’s shop and asked him if you could repair the crack in my sole. He said “yes, I can“, and started working immediately. Ten minutes later he had neatly glued a piece of rubber onto it and charged me only one euro. I went outside and stepped in the first pool carefully. The second and the third one still didn’t get me wet feet. So sometimes a one-euro-repair is much better than a free repair, now that’s a motto.

The museum presented actually a couple of interesting collections. I saw a collection of Ukiyoe drawings from the Edo period in Japan (around 1850). They were nicely presented and gave a good insight in the culture of that period.
More impressive though was a collection of 64 photographs by 8 Japanese photographers. One set depicted the consequences of the Hiroshima and Nagasaki bombings, another the results of Japan’s rapid industrialization. 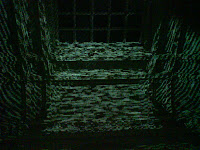 On the upper floor they presented some movies based on work by Mika Waltari, Finland’s most famous writer, as well as a representative series of Finnish paintings.
In the main hall they’d projected moving Finnish words on the ceiling and the walls, and since I heard the Finnish language is endangered I found that moving indeed.

We had a delicious lunch in a Mexican place with two nice girls. Over a spinach chicken pineapple wrap we had a little conversation about the inconsistency of me being an environmentalist but not a vegetarian, and about practicing what you preach. My wrap tasted so terrific that I actually managed to say “Well, catholic priests also don’t practice what they preach. Isn’t go and reproduce yourself a vital motto of Christendom, and yet they never do it.” Such an argument is indefeasible of course, and we finished our lunch with a healthy laugh about the issue.

That afternoon I spent writing in the post office, and reading the current edition of Time magazine. In an English language newspaper I read about Anni-Kristiina Juuso, a very pretty Sami-actress, hardly known among the Finnish, who lives in the north, and constitutes yet another reason for me to go up there.

I had dinner together with Ilpo, who had prepared rice and tofu; it was really tasty. After a short nap we went to a fancy bar and over a Fosters we discussed techniques of approaching woman, and I learned that I should really read this book ‘The Game’ by Neil Strauss. Soon enough we could see some of it in practice, albeit not in a way we fancied. On my way to the toilet I waited for another guy in the doorpost of the men’s room, so that the little man on it could easily escape the sight of the person behind me. A very female looking person passed me and entered the toilet, invoking me to cough loud enough to catch her attention. The soft-skinned man smiled and it was only after I had directed my eyes on his chest that I recognized my mistake. It was a very funny situation, and I don’t think it was such an embarrassment for him. Aren’t gender roles to be played and played with freely?

It was not so late when we arrived back home and went to sleep.