I got up at 6am (why do I write the ‘am’? Getting up at 6pm is not really about the kind of trip I’m making), so got up at six, slipt slyly out of my bed, packed my back, left a thank you note for Ellu on the table, took a banana and sneaked out of her flat. Then I walked to the port to embark on my ferry to Helsinki. “C-terminal”, where I erroneously believed to be headed, was not that well-known among local’s. Even after showing my left hand with an A and a B stroke through and a C with the hint “Sadam” (port in Estonian) she nodded and said something about Centrum. Although I had lost my map, I still knew where I had to go, and I arrived at the A-Terminal (the right one) on time.
About the “Sadam” thing I made a little joke. It goes like this: We can be lucky that George W. Bush is so stupid to be totally ignorant of every other country, otherwise he would have know that there is something called “Sadam” here – and he would most likely have bombed it.

After half an hour observing other people in the terminal, among them a group of metal tourists with black clothes, I entered the vessel. I went to the upper deck immediately, and I saw the sun rising, and felt alive. A group of Chinese woman were taking pictures of themselves, one of them awkwardly holding a SLR-camera with a huge objective reversed in front of her for a self-portrait against a rising helios, so I offered them a little help. But I don’t seem to have put many buttons there, since I was ignored. It didn’t bother me, since the upper deck was almost empty and I photographed the rapidly brightening morning sky. 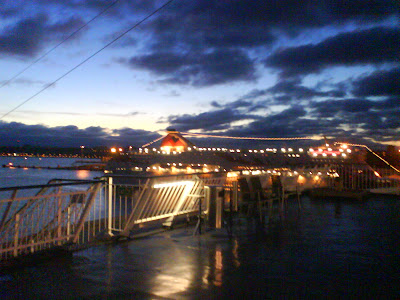 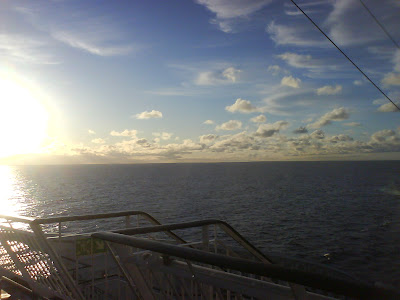 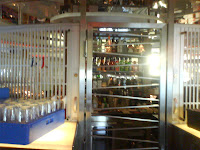 On the boat I saw something that I’d never seen before, and that really scared me off: the bar was actually… barred. And since I had made no use of it whatsoever, I didn’t find it obvious that a bar was barred – that it was in fact more like a cage. There must be savages on this boat, I thought, that rampage the interior, driving up the prices except for the 8am ferry. There must be ferocious drunks feasting on ethanol and trying to slaughter the bartender, who would probably hide in his cage, reluctantly giving out vodka to hairy claws through the steel bars and wait until the ferry would finally reach the save haven of Helsinki or Tallinn Port Areas. I heard stories about wacko’s doing crazy things on Scandinavian ferries, and I saw the group of heavy metal guys wreathed in dark gowns – connecting those facts I uttered a short “mmm” before laying down for a while.

There is another anecdote. In Tallinn, I read René Girard’s Violence and the Sacred, kindly shared by Ellu, and read about his claim that the sacrifice is fundamental in any religion, and learned about the concept of the surrogate victim, essentially a victim that represents the Father of the clan, but chosen randomly. The play is, Girard claims against Huizinga (homo ludens) not the most fundamental thing, it is originated in religious rites, which are really the very basis of human society. They introduce the aspect of randomness, of choosing the surrogate victim. Canelos-Quichua Indians in Ecuador use dice, and Oedipus, Girard reminds us, is the sun of Tyche.
Hence, gambling is not just a secular practice, but in essence a religious way of dealing with the world. The dice were the voice of the goddess, and quite opposed to being a sin, gambling was understood as a sacred practice. With that in my mind, I heard the rattling slot machines on the ferry, and I had some thoughts that entertained me.

So I arrived in Helsinki, and walked around for a while. People were much friendlier than I thought on the ferry. The famous Esplanade, a showcase park, was interesting. They have a statue of Runeberg, the national poet, and it said due to the scarcity after the war in 1918 they temporarily converted it into farmland, and actually crew potatoes, cabbage and swedes instead of roses. The “swedes” (koolraap in Dutch) thing is particularly noticeable, concerning the fact that the Finnish, a people of some 5.2 million, gained independence from the Swedes only in 1809 (next year big party!), had than been under Russian rule for about a century and finally gained independence in 1917. Aware of this history of Big Neighbour Domination, I looked at the city a bit differently, and walked a few blocks down.

In the Kamppi, a well-known shopping complex (they have a lot of them here), I sat down in a café, observing the working class Finnish, and dozing away – until the waitress woke me up and persuaded me to put a double espresso into my veins. I woke up, asked some guy to use his mobile phone, and got in touch with my host from Couchsurfing, whose address I finally found on the map (ä is not a). I walked around a little and went into a tiny bookstore, where a very kind woman welcomed me in English. I asked her if she had a Finnish phrasebook, but she didn’t. Then she offered me to write some handy words and phrases down. I still have that paper, and I used it several times. She was so kind. So here is the Finnish I promised her to memorize:

After a nice conversation with the shopowner, who had studied linguistics, sociology, history, anthropology among other things, I walked again for half an hour – in the wrong direction. I went into a coffee bar with very friendly guys, who offered me pastry on the house. They were not Finnish, but from Morocco and Brooklyn, New York. The NYC-Guy told me his family opens new cafe’s every few months, and move on once they are profitable. The one in Helsinki went quite well, he told me.

It was time to go to the place of my Couchsurfing host. He was very friendly and we chatted about his job as a computer programmer (I studied something like that in my former life). He explained to me he was writing a compiler in C++, overriding the vector of the STL for optimization purposes, coding an API and a VM. It understood some of it. His company intends to sell the language that would eventually produce code for mobile phones to Nokia – the nr. 1 corporation by far in Finland, and pretty inevitable for employees in the technology field.

Late at night we saw this Japanese animation film, spirited away, but we stopped it in the middle of it because the subtitles disappeared.