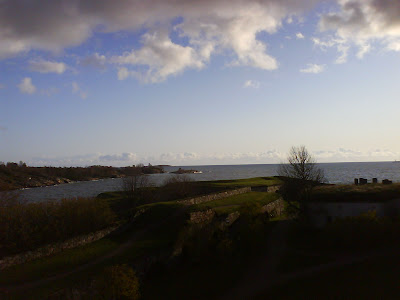 The rhythm of 11 o’clock awakening seemed to have been established. It rained that day, but cleared up enough for me to decide to visit the famous island with the castle on it, Suomenlinna.

On the ferry, that was included in Helsinki’s regular transportation system, I met a British girl called Lyndsey, and since she was on her own as well, we agreed on exploring the island together.
First we walked across a wooden bridge which connected to a neighboring island, where barrack-like flats housed some of the 900 people who live on Suomenlinna. 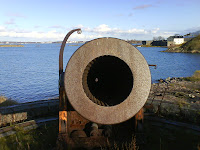 We saw some cannon barrels and went through a dark tunnel, that I very poorly lit with my pocket LED (the smart little energy saver I promote at every occasion). The cannons were Russian built and had the year 1752 engraved in their side. We wondered who had used them against whom. I read in the brochure that the island was used by the Swedes, the Finnish and the Russians as a defense bastion. In the Krimean war it was destroyed by French and German armies.

We walked through the cannon chambers and were really stunned by the thickness of the walls (about 2 meters!) The light was exceptional! We couldn’t stop making pictures of the scene. Inside a huge hall of connected chambers it was as if the light was artificial, but it was actually the sun shining through the window holes. 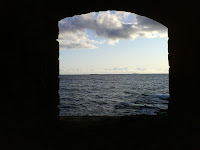 We went back across the bridge to the central island of our tiny archipelago, and visited a Lutheran church, which looked more like a Stalinist monument. Then we passed a visitor’s center and a submarine, and reached a green garden-like area where we sat down for a while. From here we could look at the open sea, and so could the cannons, which were put here in impressive quantities. As I said, the little island had been used as a defense structure by three different nations, which makes it pretty unique I guess.
We were a bit hungry and after finding several cafe’s closed, we bought a good lunch in the supermarket (the only sto 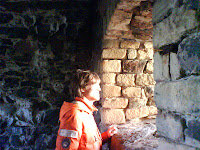 re on the island) consisting of olive bread, green cheese, bananas and more. Upon seeing the ferry arriving we decided to take that one back and have a coffee in central Helsinki, where we thus landed in a very fancy place with live music and exceptional coffee. We both texted our friends but got no reply, so we went to a bar in the artist quarter. Over a few grand Carlsberg beers we had a good conversation about eggs, ex’es, x’s, eventually framing our lives on an x-axis and rolling on the floor laughing, as you say in internet jargon. Unfortunately, time ran out for us and public transport considerations made us leave the bar. I got home savely and slept like a kitten at Ilpo’s.

I forgot to mention the construction frames we saw on the Suomenlinna island, which reminded me of Don Quichote. 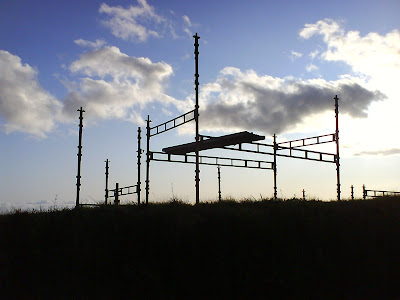