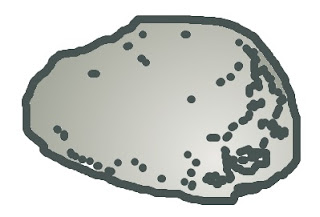 In our fast-paced modern world, everybody needs to “get stuff done”, with that “stuff” most seldom referring to physical matter. We mean assignments, schedules, tasks, templates, revisions, writings, programs, sequences and we ensure ourselves that these “stuffs” are real by describing them consistently with tangible metaphors. We grasp them, wrap our heads around them, we get hold of them, get in touch about them and so on.

It is interesting to observe how these metaphores function to construct what is “real” in our heads. Real is not the stuff that lies scattered alongside our highways but the stuff that we think we have to get done. We encourage and ensure each other about the high level of “realness” of this stuff.

But what about the real “real” stuff, the trees, boulders, butterflies? Are we no longer accepting them as real? Of course we still do. All we are observing is the use of tangible metaphores for “formal” phenomena, notably the interaction between members of our own species. And this has a sincere impact on how we experience the material realness of the outer world. If we are pre-occupied with the “stuff” we have to get done, the material world has to prove its realness by lending itself to our formal and functional descriptions, not by being logically prior to it as a materialistic worldview holds it. Note that I am not discussing the validity of worldviews, but the psychological consequences of the army of metaphors (grâce à Nietzsche) we use with regards to the “stuff” we have to get done. Matter is degraded to the mere stratum of that stuff. Of course it remains real, but the reason why we agree to say that it is real is that we realize it can interact with our own high-level layer of realness – the stuff we have to get done. It is a very subtle difference, but it has huge consequences for the metaphysics of our age.

I apologize for the density of above speculations and promise to “get real” next time.

One thought on “The Real Stuff!”