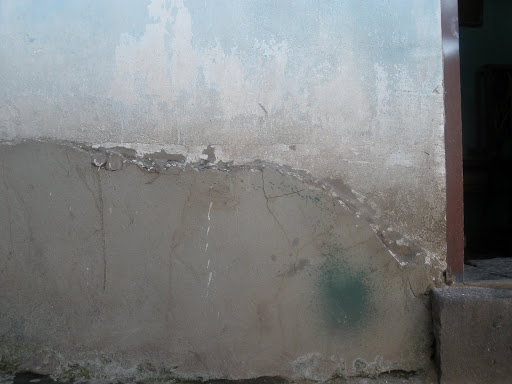 Woke up late. Bought a nutritious breakfast in a supermarket and walked around the center of Lima. Most of the streets were in reconstruction; smog and dust everywhere. One interesting thing about this city is that workshops of certain professions are located in the same area. I live in the printing press area were professional printing machines rattle all day to spit out brochures, labels, posters. I’ve seen a banking area and an optician area as well. Take a micro to Miraflores, the richer municipality adjacent to Lima, to work there in a Swiss café.

It can be argued that we will never totally get rid of fear. Death awaits us in the end, we all know that. As long as we live on, we close ourselves in in our bodies, and fear damage to them. When we are living bodies, we have fear, and when we have fear, we are living bodies. So, then, it is wise to redirect our abstract fears towards events we can somewhat overlook. Let’s say patient A suffers from abstract fears, ie. she has a fearful character. Now her therapist advises her to concentrate on something she would like to do or achieve in the next years. Patient A tells about her dancing class, visiting her grandmother, a trip to Mozambique, and a narrower jeans. The therapist tells her that she shouldn’t be only exited about these future events, but worried they won’t occur. He teaches her to be afraid that she’s not admitted to the dancing class, that her grandmother dies before she can visit her, that the plane to Mozambique crashes, that her love handles won’t disappear. She learns to direct her abstract fears towards those concrete events. At first, patient A feels miserable, but after a while (normally two – three weeks) she feels better than ever and her yearning for the future events becomes livelier. When she occasionally wakes up in fear without knowing what she is afraid of, patient A thinks about an upcoming event and what could prevent it to occur. She starts being afraid and worried about that event, and she falls asleep. The patient normally dreams about the event and her own potential actions to support its occurrence. Worrying is an asset that makes fear bearable.

That night, I go to a horror movie called “restless” (the only one that uses real bodies) about an anatomy lab with an undead possessed cadaver in it, causing the bloody dead of many people who touch it. A pretty girl, first year medschool student and atheist, starts to investigate about the origin of the body, together with her religious boyfriend. It’s not really scary though. The tension is built up in a classical manner, suspended events that get bloodier as the movie proceeds. There is some explicit footage of corpses but that can’t really scare me off either. A drowning scene, claustrophobia, nyctophobia, a skull, “you’re next” written in blood – standard elements that can’t really evoke panic. This movie really could scare only one person: Stephen King who has a reason to be afraid his heritage goes down the drain.