This is a tricky one. Have you just read the title of this post? It has been designed to captivate your attention and hence to captivate some of your time, some of your thoughts, some of your being. It has its own minute place in what it denotes: the foodchain of value creation. Now what do I mean by that (adding an introductory sentence like a puff of cool air) I want to say it raw uncompromised, like the hundreds of thousands of thousands of protesters on the Tahrir square as romanticologic analysts love to understand them. Raw.

This chain is the near perfect synthesis of the simple and the complex. Nothing is more simple to understand than a pyramid (so to speak) of labourers and businesspeople contracting them to work for them to produce stuff for a higher level and everybody is handing over the value he produces to whoever it is that is above him in exchange for futile security and a berth here below the moon. And the top of that imaginary pyramid of value creation does not exist, all there is is the chimera of a money printing machine or bars of gold in a very thick walled safe somewhere. Now at the same time the foodchain I am trying to depict is one of the most complicated things. Its parts and participants can move up and down freely, have their liberty to pursue happiness, can interact with each other in all kinds of ways – the system is not rigid hence immune to structural criticisms.

I did some work recently that spurred my chaotic mind to pen this. I had to transcribe everyday phrases from people living in the Dutch society that I had left for stylized ideological reasons. All I had to do was writing the words they say and they were about consuming and also about anal sex. I felt terrible and yet in the unique position of experiencing first-hand what I mean by the foodchain. Okay, what is going on is this a company wants to make a product that recognizes voice commands to make the empty lives of the consuming organisms more convenient. The company hires a professional linguist and a system designer. They write their program then feed it with sample voices for which they hire speakers one notch down the foodchain pretty people that get paid quite well for pronouncing everyday speech samples (the fact that it is about everyday speech certainly lends an extra dimension to this). Then at some point they decide the speech samples need to be transcribed and they purchase transcriptions at a specialized US company, TransPerfect. That company charges them a rate of say 200 dollars per spoken hour, 40% of which they actually pay the transcriber that does this work at the very low end of the foodchain. That’s me. Prostituting the only capability that you don’t need a f*cking diploma for in this wretched world: the mother tongue. So I completed this work (took a vow it be the last time) and handed the generated value upwards in the foodchain. It will be of little use (even with little technical understanding of the matter of language recognition I can figure that out) but that’s not the point. The point is the company will start selling their product, probably baked in little nifty devices and will start to make profit. Now it can be a public or a private company; in both cases it is exposed to enormous pressures. The pension-fund-shareholder suits need to beat the competition or the owner’s yacht needs to be overhauled. Everybody has its place in the foodchain and the proverbial Eagle or Tiger (or homo sapiens) doesn’t exist. Too bad. 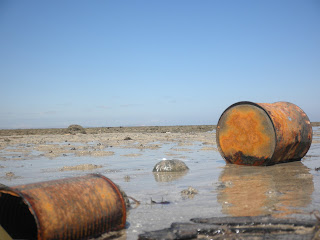 Now you’ve read this you think a bit shallow a waste of time why did I… you see? But it is just the introduction to a metaphore; in fact when we speak of Value Creation more things are involved than money making. There is a fundamental difference between human beings and robots. Humans need reasons why they do something, and not something else and in our complex world with its plethora of choises this factor becomes à la fois more visible and more invisible. What I mean is this. Because there are so many choices we are used to embracing almost anything as a reason why we should choose something instead of something else. These flimsy reasons are backed by a few Big Reasons provided by religion and adorable infant smiles and our contruct is ready. But for some heathens of the leading consumerist culture ‘t is not enough and will never be. We need a reason that is at least as good as the fundamental reason that serves at the very root of the value-chain, or we refuse to be a part of it. As long as we have a choice, we will choose whichever option has the profoundest reason.