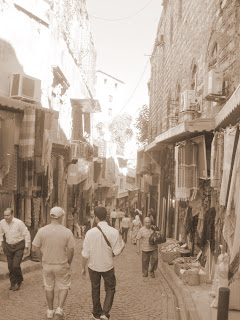 The last two days, I have been writing on the balcony. I am so grateful to my host and her mother. I can catch up with both my Charity Travel website and my parallel personal blog. At night we say goodbye and I find my way to Kadiköy easily. Just before getting on my 10pm train to Ankara a German speaking wild man from Bethlehem walks in to me and tells an incongruent story about cars he had to transport from Austria to Israel and how he is “am Ende” now because he had been robbed at Sultanahmed. He was obviously looking for my monetary assistance, but was sleek and sly enough to ask me for my contact information first. Little as I hand out my card he starts begging and I have to rather forcefully decline him in order to make it to my train.
“Ankara?” I ask a guy sitting in front of a train.
-“Yes, get in.”
So I jump on the train and it starts moving right away. If I would have taken care of the man from Bethlehem, I would have missed my train. That sounds like a funny sentence, don’t you think? I am getting back in shape. Mind the man from Bethlehem. On the train I ask a passenger “Ankara?” The kid shakes his head and points at the other train. F… Should I jump off? Where will this take me? The doors are still open and I shout “Ankara”. They surely thought I was a lunatic since I was on the right train. Kid probably just wanted to freak me out. Maybe the man from Bethlehem sent that kid, but that would make the narrative too complicated, and we don’t like that do we? I go to my seat and try to get some sleep, but it’s not comfortable.
Ankara makes a dull impression. Once off the train I go to the bay/men’s room where I pay 75 kurus/cents for a piss in a dirty stinking toilet. When I find out there is no towel I decide to stimulate the morale of the toilet attendant who is smoking in his booth. Gesturing wildly and using selected words in onomatopoeic English I signal him the absence of a towel and toilet paper and by sniffing I indicate the unbearable stench. Without words he takes a puff of his cigarette – and gives me my money back. That never happened to me before. How about you, reader? 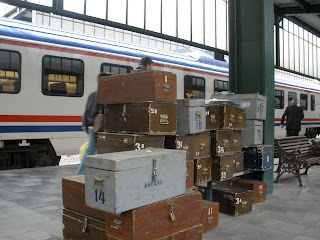 I hop on a dolmus/minibus and ask for the “city center”. Proudly, the driver nods and suspicions arise in me only when we turn on a freeway bordered by farmland. Finally he drops me off at a shopping complex called “a city center”. How funny! I have come a long way to be able to enjoy these situations as existential events. This is it. This can make me happy. In front of the shopping complex there is a garden packed with posing plastic fairytale creatures. I take pictures of them and let them represent the silence in which the early morning shopping palace is covered.
How to get to the only place a casual tourist wants to go, the city center? I take a bus back to the train station, at least two passengers are covering their mouths out of fear from H1N1. Would I have spoken Turkish, I could have told them I traveled to Mexico just four months ago, to freak them out. The atmosphere in the buses reminds me of big South-American cities. So how do I manage to arrive in downtown Ankara? I draw a circle on my hand indicating it is Ankara and put a dot in the middle. The woman I am asking understands me immediately and shows me the metro entry. Two underground stations away I find some action and perhaps even the Internet.