I can’t make it back to Adana in time, so I won’t visit an ACEV meeting myself. I kindly ask them for some photographs to publish on my website, along with their contact information because there might be visitors – occasional internet surfers – who would want to make a donation. They will provide me with footage, and I am very thankful for that. After all, ACEV is my first charity and I couldn’t yet act as self-confident as I will later on. 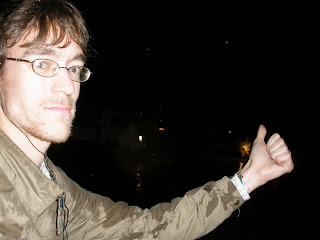 But I feel like it’s time for action. I want to get to Syria as quickly as possible. I take a bus to Antakya, where it is drizzling. They tell me to take a taxi to Aleppo which would cost me about twenty dollars. An old wound of parsimonious thrift plays up and I say no. I like hitchhiking anyway. So I try to hitchhike standing under a highway overpass my trembling thumb raised to every passing car and getting ignored. I get carried away by negative emotions. Am I supposed to do this? I am supposed to be the jolly charity adventurer? Hitching in the rain. My objective is to inspire, to make a difference in this odd world. I should think of a more professional way of fundraising instead of standing here in the rain with my trembling thumb. O, I think, if only mighty people identify with my cause and start promoting my project, start doing fundraising and getting me in personal contact with Brad Pitt, Bill Gates, Warren Buffett, Bill Clinton, Barack Obama, Arnold Schwarzenegger and Dorothy Parker. I am being delirious. Things don’t make sense now. But I know being unhappy is not a good means to achieve my goals.

So stop moaning and just move on. A servis (minibus) takes me into Antakya – I find it a terrible town. The driver speaks German and gives me a rich sample of it straight away, as we pull over where a woman is standing on the sidewalk.
“Who is that woman?”
-“Früher isch habe sie oft gebumst. Jetzt ich verheiratet. Jetzt kann ich nicht mehr bumsen. Verstehst du mein Freund?” (I ushed to shag her back in the days. Now I married. No I not shag anymore. You understand my friend?)
A driver can take me for 10 YTR to Aleppo, but I have to wait in their office. They offer me tea tough.

I worry if what I’ve heard about the visa issue is correct. But it is. It is better than that! Double entry seems to be no problem (fyi it is a problem, I will have to issue a new visa upon re-entering later), so I’ll go to Lebanon. The people at the border are friendly. Smiles, relatively uncomplicated, I pay 34 dollars (fyi a transit visa costs 15 dollars, 3 days) and they offer me Arabic pastry greasy and glistening with sugar – I like it.

I casually disperse ash from my glowing butt into the Syrian nightsky. It’s beautiful and I think I am a character to be played by a young Clint Eastwood and I feel so cool. Here I sit in that car, smoking a sweet American cigar I just bought in the taxfree shop and feeling very good. I am promising myself not to get caught in the ugly spiral of melancholy again. My driver hums a folklore melody, and I start puffing away to celebrate I managed to cross the border I deemed to hardest on my journey. It feels fantastic. This is why  I travel – I know it again. We drive through the land where the “dead cities” are, a famous attraction of northern Syria I gladly add to my list of yet-to-be-done things. That Clint Eastwood-character tips his earlobes and says in a slow voice “maybe next time”. 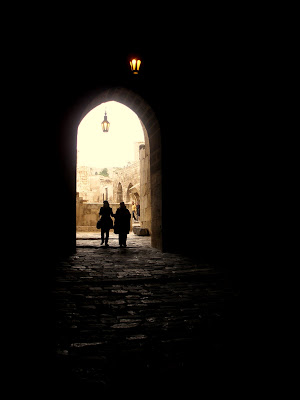 That character walks into a bar, you know, with a sqeaking swing door that you push vigorously to make it swing back and forth then walk in, giving the drinkers that curiously look up from their glasses a stern face.
“I’m looking to do something good” I say with a raw voice and spit on the ground to my right. The man bows for me and runs away, asking if anybody knows about something good. I look around with a confident, superior frown and light a cigar. I pitch the match away. The man comes back and starts stammering excuses why he took so long.
“Okay, forget it” I say and look him in his eyes, blowing smoke in his face. “What have you got?”
The man stammers about an orphanage around the corner and that the Sister has just died and they are desperate.
“Thanks” I say and drop my cigar butt, trodding heavily on it in a long slow movement of my boots while not evading the look of the man, nodding in a provoking manner.

I am nothing like that, but pretending sometimes feels good.

There is the city center, and there is the internet. I feel a bit lost now, and start thinking about moderate endorphine levels, that is applying the Aristotelian theory of the golden middle to the scientific world.

And I realize again what my idea is about. Perhaps it wouldn’t remain that exciting an experience for me if I would have to take a taxi through the crowded streets of Aleppo every day to visit some poor refugee family and pay their rent. Perhaps it would be just as boring as sitting in any stifling office cubicle, and hence not appealing to the average man?

They take me to a hostel where I can lay my head down in a dorm in the dusty attic, on strong colorful carpets.