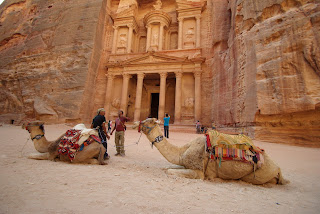 Waking up not too early since this is supposed to be a vacation day. We walk to the entrance of the archelogical marvel that is called Petra, and I buy a one-day pass (one day: 21 JD, two days: 26 JD as of november 2009. Be smart and buy a two-day-pass if you really want to enjoy the ancient city of Petra). With that pass, they let me walk around the site. I learn to ignore the many offers of horseback and camel rides and proudly stroll past the regurgitating ungulates and their mercantile owners. It is hot but the walk is quite nice. Rock carvings, niches, columns, chambers, decorative elements borrowed from many different cultures make the stones come to life. Horse chariots rush through the narrow As-Siq gorge to give their current passengers a good time or to pick up new once as the pedestrians gaze at the rock walls that are soaring up 80 metres. At the end of the 1200 m long gorge there is the Al-Khazneh or treasury, the best-kept monument in Petra and probably the picture that pops up when you google the place. A 43 metres high colonnaded facade dwarfs the unprepared tourist and bears witness of the Nabataeans architectural craftmanship and artistic touch. Al-Khazneh was carved in the first century BC as a tomb of a Nabataean king and perhaps used later as a tomb. I continue walking along the colonnaded street and past the Royal tombs, then up a hill for a breathtaking view of the surrounding landscape – alas, my breath is already taken by my running to the top. So I run into some Beduins that are guiding two Canadian girls. The Beduins, strikingly resembling the protagonist of Pirates of the Caribbean, don’t like me and so I sit down on the mountain top, overseeing the valley and dozing away in the hot sun. Behind me is the Ad-Deir monastery, another marvellous structure carved in the rocks a couple of centuries ago. Architectural embellishments are sober compared to those of the Treasury, but it has a greater talent to blow you away (be careful not to fall off the mountain though). I am “dozing away”, did I just write that? I don’t like it. I am pondering, meditating, excogitating, reflecting, musing with rigor and vigor those two rugged Russian brothers. There, you don’t read that in your tourist guide.
This is a tourist gathering, and I quickly get enough of it. Imagine me sitting there looking at the mountains, the donkeys, the waving Jordanian flags and the distant clouds, and being exposed to typical conversations like 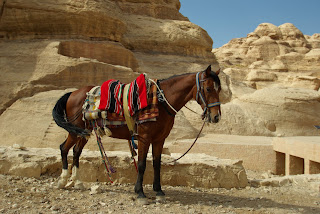 “I traveled a lot all over the world. I think my life will be too short. I went diving in Australia the last time. Always if I’m traveling in poor cauntries I stay for three dollars the night.”
-“Have you done Syria yet?”
“Yes, I’ve just completed Syria last week. It was awesome.”
-“Where are you going next?”
“I want to check out Egypt, it has a lot of things to offer.”
-“I did Egypt fifteen years ago. It’s a great place.”
“Thanks. Goodbye.”
Take a homo sapiens, put him on an airplane, and put him in front of stones. Be careful alway to tell him how special and unique the stones are, otherwise he might get bored. How to make stones appear unique. 1) Tell their history in an imaginative way. Mention the many layers of ancient cultures involved. 2) Let the homo sapiens take photographs of the stones so that he feels like he is taking them in. 3) Raise an entrance fee that is high enough to make it look important.
Don’t get me wrong, I really enjoy this place, but I have to move on. So I descend the mountain, have one more look at the Nabataean rock wonders and reach the exit on time. A taxi takes me a few meters up the road for too much money. Hitchhiking is impossible here, yet a private taxi is easy to find. And so I enjoy a beautiful ride on Jordan’s road to the south, staring at the mountains one more time until the sun sets behind them. I tell my driver about my project and he gives me the story of his traveling to Israel. Of course he was harassed by the police, searched, called out of a nightclub. He knew some person working closely together with Sharon and so one phonecall was enough to make the police let him go. These stories are no exception; it happens to every Arab visiting Israel. Just to cut this short: I do not want to live in a country whose government is suporting Israel as long at the torture is going on, and that’s final.

I am lucky again: there is a ferry to Egypt leaving that night and I can be on it. A visa to Egypt can be purchased at the border upon arrival. I spend a few hours in Aqaba with Mohammed whose dream it is to work in Germany of the Netherlands, yet fails to secure the necessary money due to an obstinate smoking addiction. His salary: 300 JD. His daily expenses: 10 JD. Two for the bus, three for cigarettes, one for a can of energy drink, four for lunch. I tell him to quit smoking and promise him help with documents should he really go to Rotterdam. It’s easy for me to make that promise since very few people actually remember it and actually write me an email. We say goodbye and I take the bus to the ferry terminal. It is crowded. Formalities are swiftly dealt with and I sit down waiting and doing nothing. As a non-Jordanian tourist I get a carte blanche and they take me to the vessel like I’m some special person. At first I cuddle in my sleeping bag on the upper deck, then I explore the ship that will stay in the port for two more hours. I discover a hot shower and lock myself in for a while. The ticket is expensive enough so I decide it should come with a sauna and let the hot water vaporize in the shower cabin. Aaaghh.