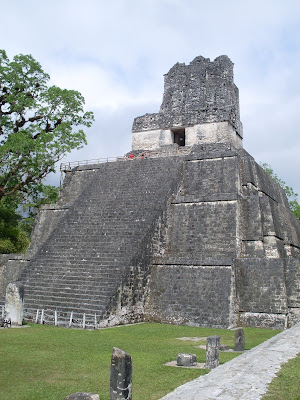 I get up at 5am to take the early morning bus to the heritage site of Tikal. It’s cooler in the morning and you have a greater chance to spot a lot of animals. A comfortable shuttle bus takes me there (gee – am I writing a travelguide here? Can I be more boring? I could mention the music in that bus or begin to describe the other people or the fact that we drove alongside the beautiful lake or the armed guards at the park entry or the flat vertical roots of a tree growing on the wall at the side of the road – but there is absolutely no use to do that. I just sit on that bus and arrive at about 6:30). While the group awaits their guide, I walk off on my own and take a path to the Gran Plaza where the main temples are. From the treetops the howls of a large pack of frenzied lions, terrified grizzlies and suffocating wolves caught my attention. I know no fear and walk off the path to see what it is. My imitation of the cries doesn’t yield any response. The noise is, of course, produced by the howler monkeys (Alouetta pigra) that live in this park. They hide well in the high trees. I do see some spidermonkeys (Ateles geoffroyi) though and the make a very sportive and lean impression. Their favorite sport is supposed to be defecating on the visitor’s head – I am warned. A little later me and a spidermonkey are teasing each other: me performing a laughable parody of his canciones, him throwing all kind of stuff down from his tree. Leaves, fruits, complete branches hit the floor next to me. The monkey and I are communicating, we are having a conversation. Perhaps not on a level measurable by any diplomatic standards, but still, we’re exchanging our views on life. It gives me a good feeling, knowing that little new friend watches over me as I explore the Maya site.
The first ruin I see seems perfectly climbable and I have a go at it. I ascend two from about ten levels and walk around – I am at the Gran Plaza and I am standing on temple number one, the temple of the Jaguar (a propos Jaguar: they do live here and have occurred to patient early visitors). A guard walks towards the temple, gesturing that I should come off. They had forgotten to put a “no subir” sign on the side I just climbed. The Gran Plaza with its north and south acropolis and two fifty-something meter temples is awesome. Instinctly, I start climbing the ruins and taking a series of pictures.

The bird of satisfaction has already nested herself somewhere in my mind when I walk on to “do” the remaining temples. Temple 3 is covered with trees. I see a “no subir” sign on one side but at the other side such a sign is omitted. With the mellow and benignant reaction of the first guard in mind and because I’m naughty by nature, I climb up a few meters. My sandals are hindering me, I don’t make it to the top. Temple 4. They have installed a safe wooden ladder to reach the upper platform. At an altitude of seventy meters it is the highest point of the city, and it has a great view I enjoy with a group of other visitors. Imagine this place, devoid of trees, and a Maya crowd at the foot of the temple. The sungod is standing on the top, raising his arms. Imagine a ceremony here, with thousands of people, a ceremony expressing gratitude for the climate that was attributed to a god rather than statistics. Imagine a Maya boy running around the crowd looking for his little sister. He finds her. She is not sacrificed to the Gods – yet the Mayas DID sacrifice people (they used prisoners and the like; present-day Mayas don’t sacrifice people). The sacrifice is rather a pseudo-scientific method to stimulate the land’s fertility than the overly stirred-up hysteric sacrificing business we know from Abraham and his tribe. Here’s what happens: The Maya priest makes equinox and solstice calculations and predicts for example a long and dry summer and a prisoner is slaughtered on the altar in the hope his spoiled blood will convince the gods to let it rain. It totally different from sacrificing what you love most (your son), a perversion that’s only possible in a religion with a problematic relation to the Absolute. But I’m not an expert on religion (I welcome comments by people who do consider themselves experts). I’m just writing what I think when I consider the height of the Maya temples. Looking at their construction skills, they could have built much higher structures, but they didn’t. Why not? I think because they had appointed this worshipped individual to have a direct link to their deity. As long as this individual is placed high enough above the people during ceremonies, it’s okay – there’s no need for a tower of Babel. No need for an absolute sacrifice to the deity as in the biblical religions. The deity provides what the people need as long as they perform their (occasionaly bloody) rituals. No exceptional wish like the victory over another people, the migration into a promised land or the total destruction of the enemy is granted. Such wishes don’t even occur here. The towers are “functionally high” as I would like to call it, hoping the term will soon become proverbial. I don’t know if this association makes sense, I leave that to my readers.
On my way back I slip into the forest and get almost lost. There is no way to measure this stupidity! I walk around in circles, losing track of where I am and get out my compass but I have no idea if I should walk half an hour north, south, east or west. Shortly after I make some noise to provoke a human anser, I find the track and tred back to the Gran Plaza, where I rest between the temples waiting for the bus back. It has been a beautiful and worthwhile excursion.

However, there is still too much aggression inside me. When the busdriver asks me for my ticket I mistakenly tell him that the other driver took it from me. He says he doesn’t know me and wouldn’t let me on his bus. A gloomy scenario of being stuck here and the memory of a lost 900 dollar return airfare ticket ignite my aggression gland and I say some ugly things to the poor driver. A little later, I find the ticket in my bag and get in the bus silently and ashamed.
“Have you been smoking something? Man, can you give me some of that shit?” the driver says in American vernacular.
I apologize and shake his hand.
-“No buddy, I wish I had man, I wish I had.”

I write the whole afternoon on two cups of evil Swiss instant coffee.