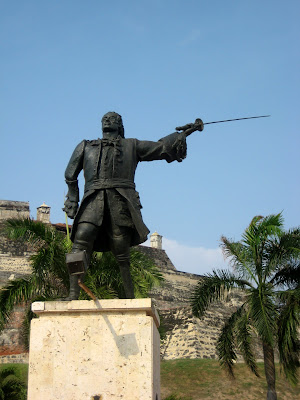 Fabien the captain takes my passport because he has to go the the immigration on our behalf and then it’s time for lunch. Last lunch on this continent, with the last juice, the last soup. Today, I’ll have the last bit of streetfood here, the last walk through a park, the last south American newspaper, and so on. It make me think about the appeal of the “last”. Why does it fascinate us so much? I like to swim against the stream, so I created a little fantasy about a bunch of people waiting at the Gate of Heaven, smoking their first cigaret nervously, already making their first friends, feeling their attraction to the opposite sex for the first time, until Peter opens the Gate with the yawning of an advanced evening. “Come in”, he says and the crowd walks through the gate. “Make yourself comfortable everyone, cloakroam is on your left, you can leave your umbrella’s there too since you won’t need them. You might want to take a shower. If you’re done, come along with me. It’s about time for the First Supper.”

I go writing in “Juan Valdez” the real caffeine intake boosted my production a fare bit. I will write an unplanned novel, just by following the main character which will be a “he”-character, and see how his mindset develops. That can be interesting. Is he going to be desperate? Will he become a vegetarian? A sex-addict? Will he give up on himself? What kind of people will he meet? I feel like writing it for one single reason: skimming the cream off my fantasy that I reckon is too rich to be healty. I dreamt seven dreams tonight. About a Finnish girl I know, who had transformed into a schoolgirl and at the same time the place I went looking for her was an old Russian submarine; in parallel to that I dreamt about an ex-girlfriend staring at me from a high bridge, about my mother, about Pablo Escobar being hunt down by a hundred tanks on the streets of Medellin, and much more. So I will write that novel in a couple of weeks, and publish it here when it’s ready. And I’ll ask for donations.