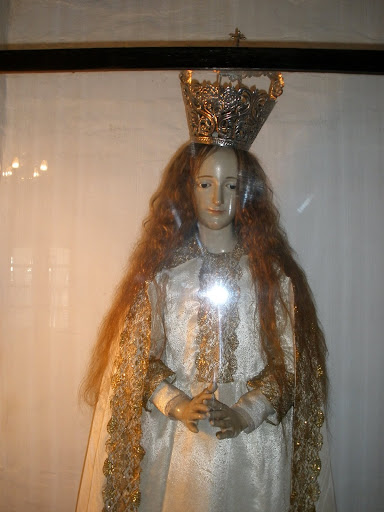 Working on fear. My traveling is a kind of therapy program, but it’s not only for me individually. I want to use my person as an example, make a little sacrifice to psychological science. When you die, you can fill out a form (that is, before you die of course) declaring that Science can use your body for research. A dead body however, is not of much use to psychological science. They need living souls to test their hypotheses.
Wait a minute, maybe I won’t be of much value for that science. I don’t care. How do I work on fear? It’s not easy. The causes often are very ancient and difficult to remove. Sometimes it’s better to try and cure the symptom. I imagine all the people / that I feel afraid of. The whole bunch! All together! Dream about them, screwdrive my head in a soft pillow and dream more about them. I accept the irrationality of the fears. I make some abstractions, you might make other ones. There are father-figures and woman-figures I am afraid of. They say things to me in those dreams and I shiver. I guess it has to do something with the order of power. My hypothesis is that these fears are determining a lot of what I do. All I do are eventually symptoms of fear. Did I order an icecream recently? Didn’t you see how I looked to the ground? Didn’t you notice how I stuttered and trembled and wanted to get the coins out of my pocket really quick and didn’t stand upright and sweated and ground my teeth? (feel free to apply this to yourself I am writing this for you). So the whole posture (or the whole pose) is one big demonstration of deep subliminal fears. And that’s some insight. Now I can go and fight the symptoms. Step one: quantification. Keeping track of it like a bookkeeper. Step two: massive attack. I want to burn the fear out of her cave, smoke her out of her hole, clusterbomb her beyond recognition. But the fear is hiding too deep, so I go at the main symptom: the gibber. Behead the gibber! Shatter the True Being in order to be able to P L A Y it. You were curious about my Theory of Pure Being? That was my Theory of Pure Being.

I write all day in the canteen above a supermarket because I can pay there with my credit card. Without that card I would have been like a bump. I would have been someone who lives in ways I cannot even imagine. For a few dollars I buy a good lunch and coca cola and work diligently on my computer. The night before had not been very inspiring, but I’ve learned from it. I had run into two German girls in their early twenties that study international management in Montevideo. They were camping in the national parks of Paraguay. I envy them for what they already know about the world in their early twenties. I showed them the bar Britannica and was glad they really liked it. Maren and Annika liked Weizenbier and coke so that’s what I got them. We danced later, and I saw the guys I shared the room in my pension with. They had a good time I saw; the Swiss macho had just kissed another girl and made the girl he fucked the other day painfully jealous. The strong blond German waited for the girl he met the other night in order to fuck her later in a love motel. We were dancing under the Paraguayan night sky to music of Bon Jovi, U2, Guns ‘n Roses on the terrace of this only bar in the center of Asuncion. The sky was dark, the basedrum resonated. Vincent, the big black guy from Nigeria could dance really well. People took a lot of pictures. I flirted with a beautiful girl, whose pretty face I saw only against the wild shimmering light of the stroboscope. She told me she was a surrealist painter and twenty-seven. I told her I am a surrealist writer and then we danced and kissed with our eyes open and I said “you know that surrealists kiss with their eyes open?” in the stroboscopic light with the big moon in the background it was a brief share of infinity; she gave me her card her name is Guadeloupe and she said she is a serious person. That means she won’t jump into the bed with someone just like that. She went home early. The longing for nearness, the nearness of You who don’t exist (please, don’t exist…), the nearness of lips that talk and talk and talk so near they cannot talk any more.

I will take a bus straight to Santa Cruz, Bolivia tonight, skipping the rest of Paraguay because I feel like moving on. Got really lucky with the ticket: I had exactly enough Guaranis (Paraguayan money) to pay for my trip to Santa Cruz.