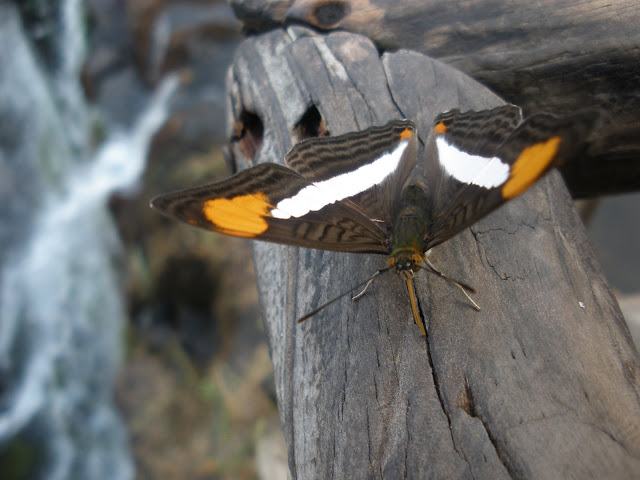 I have to admit the ad was too hysterical. Sorry for that. But I was a little bit bored and that’s one of the things you do when you’re bored. The other thing is to construct a theory of Pure Being. I’ll do that later.

First, I’ll tell you about the beautiful national park of Iguazu, the Catarates. It was one amazing day full of experiences! In the morning, I was a little late for my bus and I saw it driving away without letting me on. I cursed and walked back at the bus station, where I calmly summed up a portion of curses in Spanish to the salesperson. El chofer tiene nada que mierda en su cabeza. Es un hijo de puta madre.” A girl told me the cursing sounded very natural and I was kind of proud about that. A few minutes later, another bus took me straight to the Catarates. It was raining and most passengers were workers from the national park. I didn’t expect many tourists that day. However, at the entrance they were already lining up. I met some girls from Minnesota with whom I would do the first activity: a train ride to the Garganta del Diablo, the Devil’s Throat, one of the most impressive waterfalls I’ve ever seen. We kept taking pictures (my camera got wet and the display broke) of the violent water amassing in the giant Devil’s gulp down. The mist was fascinating, we were just looking down into a white warm cloud of water. I’m less afraid to die now because I can imagine better how I want it to happen. When I’m a hundred years old I’ll go to the Catarates de Iguazu with an inflatable rubber boat. I’ll sneak over the railing and row my boat just in front of the waterfall, working against the stream. At a certain moment I will sigh with a thankful smile on my face and slowly lift my oars out of the water. And then the waterfall will just swallow everythi 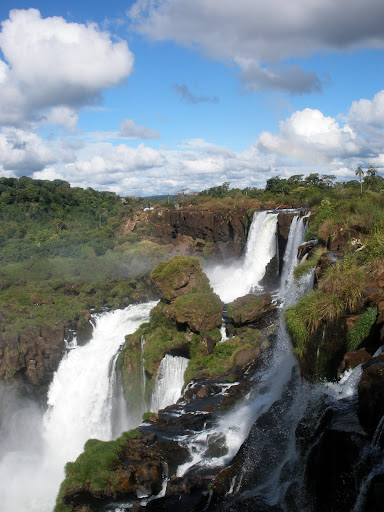 ng. I think this is a very good way to go. If you’re still around in 2079, watch the news.
After that trip, I redeemed my voucher for the “adventure” tour, and was put on a gas truck that slowly drove down a jungle path. A nice lady told us about the Cappuchine monkeys, about the bamboo canes that grow about three centimeters a day and other natural facts. The dog-sized mammal Coati, that looks like an ant eater is common here. So I met this Dutch couple who offered me to send me some pictures taken by their camera, and we enjoyed the boat ride. They parked the boat under the waterfall for a few seconds in order to get us really wet. It made me feel stupid and worried about the computer in my watertight bag. We walked around the Isla San Martin, beautiful view from above at the waterfall, we spotted beautiful birds and butterflies. One large blue butterfly teased us by folding his wings together when we tried to take his picture. We passed the ugly Sheraton hotel, and I saw a bunch of about twenty Coatis on my way back.
That night, the Dutch couple visited me in my hostel and kindly invited me to have a beer together. We ended up having a good conversation about literature. Meanwhile, a Persian guy made the face of the woman with clay (“I make you face wihth cley”) for ten dollars. We also had dinner together; the steak and the Malbec were really good. When I arrived at the hostel, I was told that the guy from the other night had been there asking for me. Probably, one of the willing girls had been with him. I’ll never know.

One thought on “April 5. Iguazu Falls.”