So I just walked out the other day and walked towards the highway. A cardbord “Lyon” I made and held up, but most of the cars had a 21-licence plate, which is Dijon. I kept walking, it started raining… isn’t hitchhiking great… wait a moment, this is not going to be just another boring story about hitching a ride… this is a great, I might even say an Obamesque account of what really happened. Obamesque means (according to Hilary Clinton) something comes down from the sky. In my case, this was (after a few miles walking) the first car with a 69-licence plate (Lyon!), who picked me up. So what? No, you wait… The car stopped right in front of my nose; not because h’d seen me but because he had to fix a problem with his battery. I walked up to him and told him where I was going to. The driver decided to take me with him. He introduced himself as Pascal, a bald friendly chemistry and physics teacher who was going home to Lyon with his two children. Wait… when we drove away it started raining stronger. Why do I always get lucky? Anyone who has an answer (except from the lord himself, since He would take away the magic a little bit) post it as a comment please.
But the real reason to hitchhike is to get to know very different people and their dreams. And I was served right away. He told me about his patchwork family, about his dream of traveling with his sun one day, after he made his bac (schhol exam). Yes, it was nice to drive in that car on the rainy afternoon southward bound on the route de soleil, and to talk about Environmentalism, musical education for his with Mozart and Nirvana, which he played in his car. I don’t know, now I am thirty years old, and still a shadow creeping on the earth’s crest and enjoying it like it’s the first day I am on this planet. 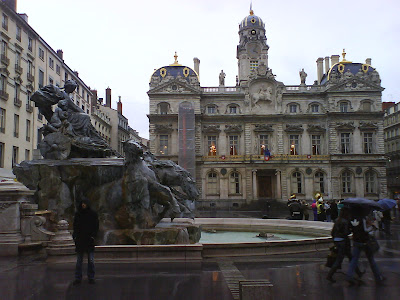 So I arrived in Lyon Perrache, and walked to an internet access point like I was used to do. Like a programmed robot I tried to get a place to sleep. What this what I called the charm of it: not knowing where you will sleep every new day? Pushing luck to its very limit? Yes, a few hours later I would get lucky again. Here’s what I did. Took the metro to Bellefour (Lyon’s central square), had a salat under the golden arches, wrote until late, and then walked through the very lively center of Lyon. Eventually I met some people in a bar, who offered me not only a nip of Absinth but also a place on the leather couch in their apartment in the Croix Rousse, Lyon’s young area. They were musicians and their main instrument was… a game boy. I learned that the “8-bit music”-scene was pretty big, and “eat_rabbit”, whose name is Yvan, one of its leading artists. I slept well, the loud drumbeats that echoed in my eardrum where pleasant.

The next day I thought about my trip to Portugal, and decided to fly. Well, the real reason to fly was that I wanted to take off from Lyon’s airport because it is called Saint-Exupery and I have this little faible for the petit prince. Apart from that, hitchhiking 1400 rainy kilometers wouldn’t be a pleasure. But there where other factors, too. I lost the inspiration for my novel, and felt not on top of things. Down there, in Portugal, this would probably change, I projected. So I booked a ticked to Lisboa and decided to spend a few more days in Lyon.

But i did enjoy Lyon, though not exhaustively. I visited the Musée des Beaux Arts where I discovered a few nice objects: 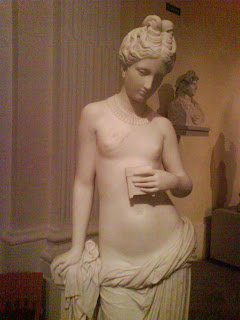 I stayed another day at Yvan’s place. Then I found some couchsurfers. I remember writing in a bar called “komin” and walking to a subway station Fourviere on the other side of the Rhone and the Saone rivers that made Lyon so strategic for the Romans. They where young students from Brazil, and we spoke French. My memory is so weak, I can’t remember much from the days that followed. They where laid-back, I laid on a cosy couch, played Guitar (which I still can’t) and talked about subjects I didn’t really knew about. My hosts where nice people; very open-minded and clever, too. One day I only left the appartment to buy some food. The rainy weather made me kind of lazy.

One day I made sure that I will go to hell. Here’s what I did. I visited the cathedral which lieds proudly above Vieux Lyon. In an entrance hall, I stood in front of a Sapientia-statue and saw the coins in the water below her feet. I picked out all pieces of 50 Eurocent to give them to homeless later on. I tossed the wet coins in my pocket and walked into the church itself. There was a sign “confessions” and one moment I played with the thought to confess my freshly commited sin. But no, I went out, enjoyed the view of Lyon and walked down through the Jardin des Roses towards the center. Soon enough, I saw beggars on the streets, whom I gave the coins. No Mr. Ratzinger, I don’t feel sorry. I’ll face the consequences at the end of the line. 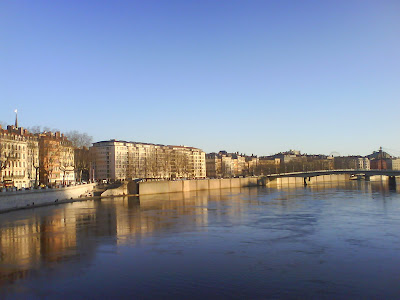 I stayed up the final night writing, because there was no point in sleeping. I wanted to be at the airport on time.