So I went on. Let’s tell the story of a typical hitchhiking day. The reason for hitchhiking is not saving money, but meeting people who are as different as possible, because that inspires. One or two of such days is advisable, not more.
Posting myself in Mainz near the Autobahnzubringer was easy. A man who I estimated in his mid 4o’s picked me up with his Sedan. I saw he had a KL-licence plate, which means Kaiserslautern, which meant for me the right direction. He told me he had his own company and worked for the Americans. What he did exactly didn’t interest me. But as he mentioned the US-Navy, I had to ask him about Obama. It was Obama-day, after all. In his personal opinion, his stressed the ‘personal’ part, it was a bit strange that a black man was elected. Almost every CEO and pilot is white, he said. Then he went on talking about Turkish people in Germany. He had a Turkish employee who returned to his roots and didn’t integrate. He said that was a big problem. I don’t know if he had racist tendencies, let’s hope not. He dropped me of in Kaiserlautern at a gas station. There I could see some Obama and stay warm inside. After a while, and a lot of asking around, a young social worker in a VW-van took me to Ramstein, a Autohof near the Ramstein military base. Again, I was reminded of America, and of Obama’s inauguration. I walked around the parking lots, asked a lot of truck drivers because they usually enjoy company, and ended up in a brand new BMW two French guys had just bought because it is 10.000€ cheaper in Germany. They literally raced towards the border, enjoying the absence of speed limits in Germany. I saw a peek of 200 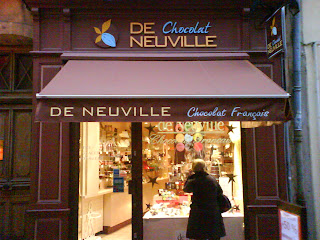 km/hour on the display. At the French side, they kept the law and drove 130 km/hour. We didn’t talk much. But we listened to the inauguration on the radio. I cried when Obama took his vow. The French guys lived in Troyes, which was a bit out of my route to Dijon, but that didn’t matter. At a parking I finally caught a ride to Dijon from a very nice couple in a comfortable car. They even dropped me off at the station of Dijon. I asked for the address of my friend’s place, which was la rue de Capuccines in the center of Dijon as I remembered from nine years ago, but nobody at the accueil knew it. They gathered around a plan de Ville and finally, with the help of the internet, they found it.
Outside of the station I met some guys who looked in need of accommodation. I gave them some tips concerning Couchsurfing in the internet cafe nearby. Then I went down the street and found the house of my old friend, the composer Jean-Marie. I remembered the little street from nine years before, and hit the doorbell. Although I had dropped him a 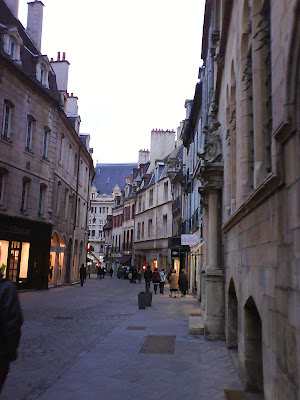 message on Facebook, my visit came as a surprise. But it was great to see him again. We talked late, while Obama talked on the flat tv-screen in the background. The atmosphere was fantastic. I slept well in the studio in the basement, and practiced my French with the tv set which continuously emitted quizzes in bedazzling speech tempo.

The next day I spent as usual, went to a bar where I wrote a few pages. Well, first I made a few pictures of the Vieille Ville, which is very beautiful. Then I dropped in a bar with very good coffee and now I could use my newly bought little white eee-netbook pc, and type in some texts rapidly. I correct a lot when copying texts into the digital realm. It’s a key step in my writing I guess. I spent about six hours in the bar, and then went home to meet Jean-Marie. He was preparing to leave again for Nancy to go to a performance, and I decided to travel on to Lyon the next morning. We promised to meet again in the summer when the weather is warm and the workload smaller.

One thought on “Dijon and on and on…”