Monday passed, I wrote. A friend dropped in and we played the oldest Super Mario game. I was very bad at it. At night, I went to a bar where they had a Blue Monday, which meant beer for just 39 Kr. That was just cheap enough for me to have one beer, no gulping involved. It was a nice bar by the way, decorated with Music Posters from Creedence Clearwater Revival, Neil Young, Nirvana, U2, Red Hot Chili Peppers, Smashing Pumpkins, Bob Dylan, Madonna, and with drums and guitars on the wall. Smoking was not allowed inside, but according to Norwegian strict rules, drinking was not allowed outside. As a Berlin citizen, I was of course a bit, how would you call it? 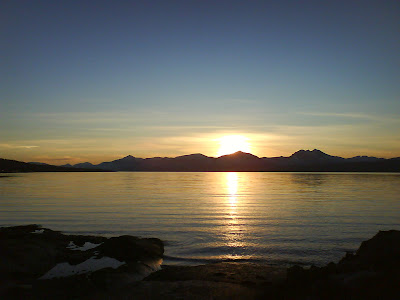 Let’s take the next day here, too. I wrote in the morning, then went to the student’s center driv and the lastebilsentralen (cargo center) where I found out that Norcargo / Bring drives north. I got the cell phone of a driver, who took me shortly after 5pm to Tana Bru, of all places. It was a long night, but I enjoyed to be on his truck, having some conversations. Near the Finnish border (he drove through Finland to Kautokeino and from there headed north west) we saw a huge reindeer herd, which was claxoned away by the continuously used mighty horns of the big truck. The animals ran off the road. I asked if there never was a deaf one. Some Finns told me that reindeer were the most stupid animals on the planet, but I doubted, wondering why they could have survived for so long in those latitudes. It was a beautiful scene, seeing the flock making way for the large truck, one of a handful by the way, delivering goods to the upper north of Finnmark. Logistics become more easy to grasp in hardly populated areas, as to many things.

Back to the basics. I played with the thought of quoting Penn/Krakauer’s Into the Wild for some time now. “It’s hard to catch a ride up north”. For me, it was all too easy from the Truck Terminal of Tromsø. “Not all is well on the hippy front”. My ‘hippies’, the young couple with their three dogs, were very happy. “Happines only real when shared”. That’s true in Tana Bru.

Tana Bru is a little settlement, not more than a hamlet with a gas station, where they let me stay inside. I waited several hours and then got lucky again. When does it ever stop? When does the fairy point her wand at some other being than me? It feels sometimes like I am traveling in an aura of untouchableness, which is nice on the one hand, but if you yearn for being touched once again, it’s not a very good idea. So this time a carbage truck driver offered me a ride to Kirkenes, 140 km further east, near the Russian border. They have do drive all the carbage of the region to Tana Bru since there was the only dump, he told me. Again, logistics and all the human structure we create on the Earth’s surface became translucent, and in understanding I felt part of it. In the truck I thought about my writing, as my frame of reference converged with the window of the truck, which protected us from the snowy foggy, and completely dark, late afternoon.

My couch-surfing host was not there, so I had a small problem. I had to rely on the hospitality of the people here. First I asked if they wouldn’t let me just be in the hotel overnight if I did some work there. Impossible. I decided to let it all out, resulting in the following conversation:

Amidst the bleeping sound of the hung up intercom system and the neon lights reflected in the fresh snow, I walked away. It was time to visit the church. And right in front of the church, fortuna’s arrow struck again. A young German fellow, Daniel, led some youth group there filling in a gap year after High School, and told me it was no problem at all to stay at his flat. Saved for the night, again. I never run out of luck. Am I glad I didn’t run for president in the US, I really would have hated myself defeating Obama.

Maybe you think Kirkenes it in the middle of nowhere. But there are actually some interesting things here. Yeah, let’s render some statistics here! It is the youngest community of Norway, just celebrating the 150th anniversary as I write (that’s right); it has the only point on earth where three time zones meet, the border between Norway, Finland, and Russia, and you can book an excursion, which I won’t. It’s enough that I have to put my clock ahead two hours when going to Russia. Daniel told me a nice Russian border story. It is absolutely forbidden to cross it without a visa (if you do, you end up paying about 1000€ and spending a night in a Russian cell). So when fishermen went fishing at a creek that constitutes the border in some part, they threw out their fishing-rod just a bit too far and it got stuck on the other side. And then… a hand appeared from the bushes and threw back the line. Sometimes, Russian border guards are nice guys.