In Buenos Aires there are certain areas, like Villa Ciudad Oculta, that you can’t find on the map. They often don’t have clean drinking water, electricity or gas, and the police won’t enter there. The local ngo LIFE Argentina organizes events for children, supports soup kitchens and delivers school supplies. We visit and support a birthday party.

It started in 2001, when an informal group of people orgenized birthday parties for children living in slums such as Ciudad Oculta, Villa 31 or Ferrera. In 2005, they became official and called the organization L.I.F.E.: Luchemos para una Infancia feliz y con Esperanza (striving for a happy childhood and a brighter future for children).

We find L.I.F.E Argentina through idealist.org, and after a brief phone call we arranged a meeting in their modest office in Regoleto. We were received by Alo, a kind coordinator from Estonia who has been working here for 5 months, who explained us a lot about the organization and its mission.

L.I.F.E. is run completely by volunteers. It is politically independent and not religous. Their primary source of support is private donations. 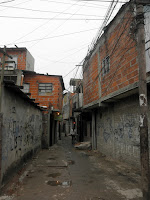 Ciudad Oculta is about 45 minutes away from central BA by car. Technically it is still inside Buenos Aires City. The population density is very high: about 100,000 people live on five square kilometers. Officially, Ciudad Oculta doesn’t exist. The poverty here is different from the poverty in Ferrera, where L.I.F.E. is also active. Urban poverty means the children have no green playground, crime rates are high and the streets are dangerous. There are cases where a family has a modern television set, but the children go without food.

L.I.F.E. offers school supplies and volunteers help tutoring math, Spanish, and English.
Often, volunteers have special skills or are even trained psychologists or social workers. The target group is children aged 3-12. The goal is simply to keep them off the street and prevent its negative influence. They have also organized anti HIV workshops, and a successful painting workshop for children with their own facebook-page.

In Ciudad Oculta, L.I.F.E. works with five comedors or community centers by sending volunteers to carry out activities there; each comedor reaches out to approximately 150 children. 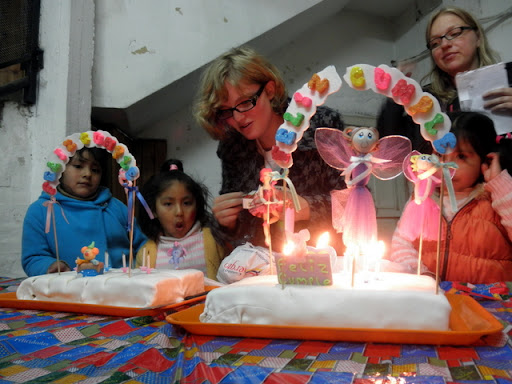 Three times a week there are activities at different comedors. Volunteers receive a 75-minute briefingbefore going to one of the comedors to carry out the activities.

Volunteers pay a one-time signup fee of 30-50 USD, depending on how long they stay. Apart from that they cover transportation from the center to the projects. L.I.F.E. can arrange accomodation for long-term volunteers (more than 1 year) for about 100$ per week.

Typically, volunteers stay for 2-3 weeks, working at a center for two or three times per week. You can contact L.I.F.E. staff directly through the website if you wish to volunteer. Volunteering coordinators or interns stay longer of course, normally for about a year.

Kamiel joins a team of volunteers to Ciudad Oculta to organize a birthday party. This time, five children celebrate their birthday. The director of L.I.F.E., Liliane, drives the group to the comedor in a minivan, and upon arrival preparations are begun. Within half an hour, the comedor is turned into a nicely decorated children’s party
About two hours later, the volunteers clean up and everybody goes home.
On the way back, we stop by another comedor and I get to see the area. A spooky abandoned hospital, unpaved roads, garbage, crumbled buildings – it is a typical urban slum.

L.I.F.E. succeeds to bring hope into the lives of many empoverished children and their families. They have taken on very important work and deserve all our support in the future.