Mother Teresa’s Missionaries of charity offer volunteer opportunities in the poorest parts of Calcutta and other cities for every visitor who is willing to help.

We donate food for the orphans resident at the center.

We don’t need to search long for a Cause in Calcutta. Everybody associates this city with charity, because it was in the streets of Calcutta that Mother Teresa began her mission. Now, more than a decade after her passing, her organisation, Missionaries of Charity, is represented in far over 100 countries. We visit the “Mother’s House” where we have a glimpse at her tomb, a simple marble square decorated with flowers. It is explicitly allowed to take pictures of the grave. We ask whom we should talk to if we would like to make a donation and wanted to be shown around, and they send us to another building. 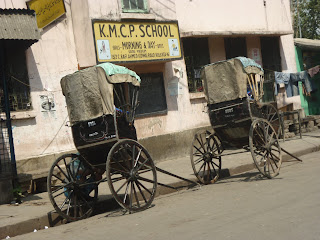 It is one of the orphanages run by the organisation, and they are just enrolling volunteers. Dozens of foreigners have flocked to the building and await their turn patiently on wooden benches in the courtyard. Everybody is accepted here upon presentation of their passport. No need of police clearance, application forms and fees, proof of experience in interacting with ovc’s – it is working according to what we have in mind. The volunteers are sent to orphanages or centers that take care of the fatally ill and destitute in high density areas, where they help out with all daily chores and basically relieve the burden of the nuns.
We talk to some volunteers about their work here.

We conduct a short interview with Eliza, a Canadian lady in her fifties volunteering here.

How did you find out about it?
-It is very well-known. This is my second time here, and I know about it through word of mouth.
How long will you be in India?
-This time I spend one year here, for travelling and meditation. It’s my fifth time in India.
What was your first experience like?
-Here in Shishubavan I worked with children for ten days, feeding and changing them, and giving physical therapy. My first time working for Missionaries of Charity however was in Khaligat, and that was a very special experience. I worked with adolescents there.
What is it that makes it special?
-The motto “do all you do with love.” They don’t ask special questions, no training is necessary, you are asked to do all sort of things. In Khaligat I ended up giving out medicine and massaging them.
Do you encounter any language problems?
-Often they don’t speak English, but we can use sign language. Or just hold hands, when emotional support is needed.
Have you done volunteering in other countries?
-No. It is not easy to find ways to do it.

One thought on “Missionaries of Charity”