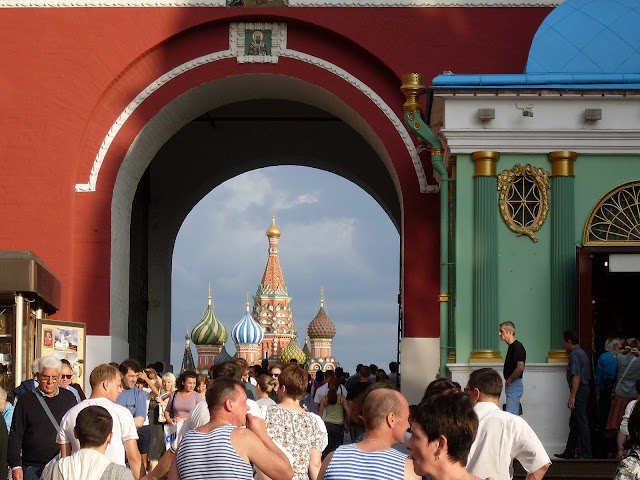 A lazy sunday. I wake up insanely late in the house of incredibly hospitable Maria and her mother, after good dreams about getting water at the well. They have well in the garden which they actually use for their drinking water. It is the first time I have ever taken water from a well, letting the bucket down, scooping water and dragging it up again, it is great, it is fantastic. So I have been dreaming about the bucket and the well and it is three in the afternoon when I jump off the air mattress. Maria made pancakes with fresh raspberry jam. Russian hospitality is so good. And here the writer does something extraordinary, at least he wishes he could. But no; we say goodbye, shake hands, and I take the train back to Moscow. From Jaroslawskaya station I decide to walk to the Red Square because this time, I did not forget my map and earphones. So I walk down the Prospekt Akademika Sakharova listening to a lecture on Dostojewski and taking occasional photographs. On the Red Square, some guys from the 789-hitchhiking group are waiting with a 789-sign (7. of August, 2009 they organize a gathering in Odessa to which of course, they hitchhike). I talk to them and then decide to continue my walk through Moscow since the sunset would allow some pretty pictures. I cross the river and pass Peter the Great and Gogol, walk the Arbat street where I settle down in a 24-hour café to catch up with the waking hours I lost in my early afternoon slumber.
The showering inferno.
Some people shower two times a day. From my experience, they tend to enforce their “hygiene” standard upon the people around them as well. This condescending attitude gets on my nerves. Any argument against them coming from someone who takes less than two showers a day can be tackled with only a subtle reference to alledged dirtyness. Even when the Other asks for respect for his way of life, showering every other day like myself, he will be turned down. From the point of view of the two-times-a-dayer, respect comes later in the game. The personal choice of the every-other-dayer cannot be respected because – in the mind of the two-times-a-dayer – a person who doesn’t shower daily is not a fullblown person. The two-times-a-dayer tries to downplay allegations of disrespect by sniffing with his nose and trying to convince bystanders of how dirty the other person is. I loath this behavior if I loath anything.