A little hangover can be worked off by four cups of coffee and a cold shower. At twelve I’m good to go and walk out to find a boat that will take me to Panama. Enter: Club Nautico. I walk in and ask some people for a boat to Panama. There are plenty of sailors headed that way, that is, to the San Blas islands. All you need is some money. They have some kind of agreement that the passage cost 350$. I try to talk that price down. An older man in a red shirt asks me to play a game of chess with him and I agree. There is this idea in my mind that he’ll offer me a free boatride if I win the game. How romantic! He makes some mistakes and I take his queen and the first game is mine. In the return match, I make some mistakes and he takes my Reina, giving him enough advantage to win. In the third game, I concentrate a little bit more and got us into a rather complicated situation. I see him thinking. He attacks a last time with his queen but overlooks something; I get a pawn across and bring the game to a victorious conclusion. “Colombia in big trouble” my opponent says ten minutes before losing the match. “Holanda very strong”. In that moment, a real sailor walks to our table, making me feel like I’m in a pirate movie. I stare at his bright blue eyes and his large unkempt beard. We shake hands and he says he is planning to sail to Panama on thursday. I offer him to pay 200 bucks, he will think about it, maybe, if I bring someone else. Sailing is a costly diversion. Tomorrow at 10am I will meet him again. He introduces himself as Doug, and he has a Dutch boat. 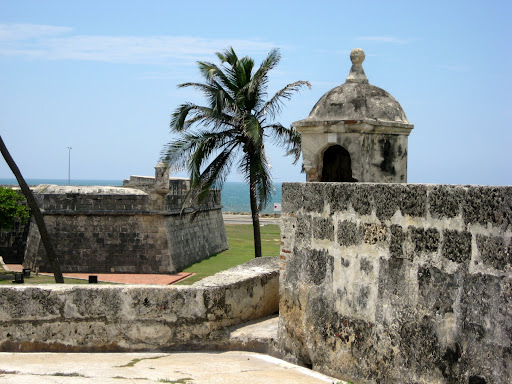 I walk on, feeling the hormomes of happiness and exaltation degrading in my blood. The sun is setting. I walk into the historic old town asking for a place where I could get a real espresso. I want to write. This city has a pretty face! It was the prime port of South America, the gate of trade for a whole continent and it still breathes this esprit albeit in that typical touristic way of souvenir vendors and handicraft shops with people shouting at you in English “he man where you from? Holland? Amsterdam!” Just close the ear that hears that and you’re fine. I find a stylish café and get at least some writing done.

At night, some police come to the hostel and mention Ivan’s name.
“Es tu amigo?”
-“Si.”
“Venga.”
They take me to the nearby park where the lizard lives, and Ivan sits there on a bench, doing fine and waving at me. The officers have brought him from far far away and might have saved him a lot of trouble. When they asked me to com with them and explained somethings with such a heavy Colombian accent that I couldn’t understand them, I was very worried. I might have to identify a body, that’s what I thought. But I only had to identify my new buddy.

Tomorrow, I will buy some cheap cigars on the street. Every once in a while, I like to walk around with a cigar butt in the corner of my mouth. It has a lot to do with identity. I should know all about the concept Identity since I studied philosophy. But I don’t. I really have no idea. You can tell me anything, anything you like and then just say “look, and that’s exactly what identity is” and I would know nothing to disprove it. I’d go “okay” and nod my head dimly. The mere form of a conjecture can be more than enough to paralyze any thought about the substance of identity.