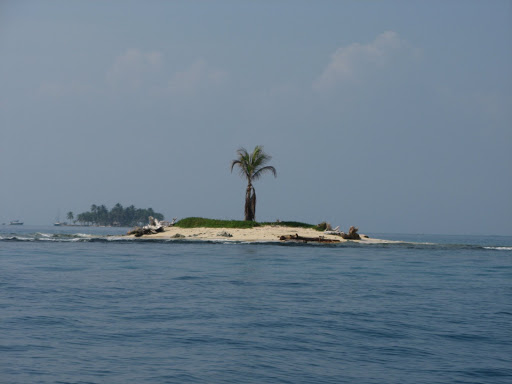 Yesterday we discovered this island with only one palmtree on it, and decided to go there. After making absolutely sure it was no hallucination, Dan, Karina and I took the dinghy and rowed up to the tiny isle. One single palmtree, standing firmly in the middle of the island, surrounded by sparse grasses… one single palmtree – it’s amazing. It’s unique (fortunately it was the only one-palmtree-island we’ve seen) and it makes us feel good. One single palmtree – I feel like my philosophical Self is coming back. That singleton right there in the center of the universe it is defining by its very act of existing, that unique object it is defining a multitude of perspectives. Any given location in the universe of one-palmtree-island is distinguishable from any other location exactly through the viewpoint it has with respect to the single palm tree. The palm tree shows a diff 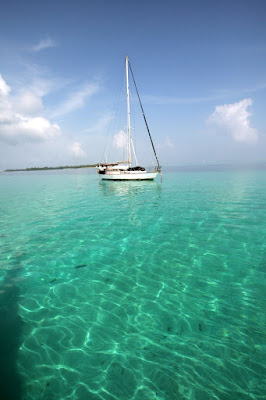 erent side to any location on the island. Every location has its own single palmtree. There are uncountably many palmtrees on the island. Everywhere you look you see a different palmtree. You must get mad when you live here, seeing all those different palmtrees every day. In fact, if we’d let a typical human being inhabit the one-palmtree-island, he will most probably – cut down the palmtree.

Rowing back, Dan sees something very big moving in the water. We take brave Karina, who is swimming while we row and chatter, we take her back in the boat and row to shore fast. It could have been a shark. We heard stories. A guy in Panama will tell us that he went snorkeling on the San Blas islands and saw a hammerhead shark at some three meters distance. He had been extremely lucky, according to his captain. He could have been torn apart and eaten for lunch. After all, just like us, hammerhead sharks love some variation of nutrients.

It’s a mellow afternoon. DJ basks in his brilliant Britishness playing cricket with small coconut sprouts I throw towards him and a palm branch. I talk about math with Karina who is going to study it. I try to build a makeshift raft but fail dramatically at it. It falls apart before it even floats. Doesn’t matter. We sail to another Kuna island where Fabien takes care of the immigration. We will sail overnight to Portobello, Panama. I skip dinner to avoid seasickness and retreat in my berth for the final night at sea.