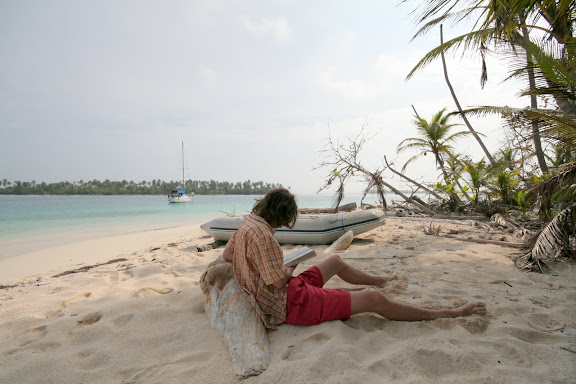 We get up with the sunrise and row back to the Koala. It’s only 8am when we have some breakfast and sail for some ten minutes to another island we readily agree to call “Monkey Island 2”. This time, we start building shelters. DJ swiftly erects some fragile structure with palmleaves and a flagpole with his t-shirt, making him the official emperor of the island. I start digging some holes in the sand because I have bigger plans. It is my German part – pardon me – that plays up and wants to throw DJ off the trone by building a larger Speerian monumental dome. Two thick treetrunks, a connecting stick and an array of interwoven palmleaves as a skewed wall – that’s all. The German engineer läßt grüßen. Jawohl. The structure I have created is inmediately dubbed “prison” for its ruggedness. I slam my feet together in jest and lift my arm just like a saluting teuton soldier. Should we destroy it afterwards as a sign of courtesy towards the next visitors, since they deserve to “discover” the same pristine pureness as we did.

In the afternoon, we move on. I steer the boat for a little while, which is harder than it seems. We have to go straight west, 270 degrees, exactly towards the sun to reach the archipelago’s westernmost island where we do immigration tomorrow. Fabien, our cap 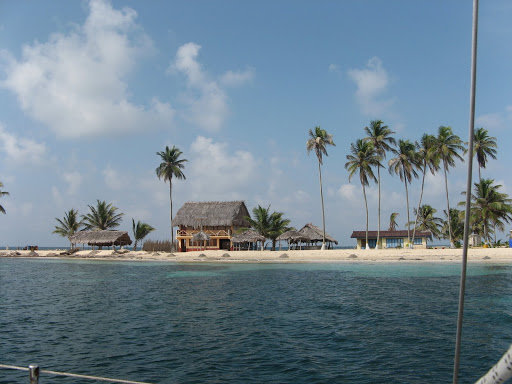 tain, tells us he once sailed manually from Curaçao, where he had bought the Koala, all the way back to Cartagena because the autopilot belt was broken. It’s a tough job. But our captain is a tough sailor. He has done three Atlantic crossings, one of which solo, which is not a bad track record.

We anchor in front of an island with huts on it and antennas on the rooftops. A Kuna with picks us up with his canoe, and we can look around their little town. A Colombian fisher boat from Cartagena has docked to load coconuts, the main source of Kuna sustainance.
It is our money they like the most of us. The streets are full of vendors praising their embroidery. Others are asking a dollar (the official currency in Panama) for a photograph. But I’m not a sack of money, not this time. I enter the island with empty pockets and speak to a man with a boat and an “Orlando pirate” cap. He tells me something about his village. 600 People live here, more ore less traditionally. Their canoes are built only recently (some 15 years ago) and the outboard engines that are mounted on their wooden stern 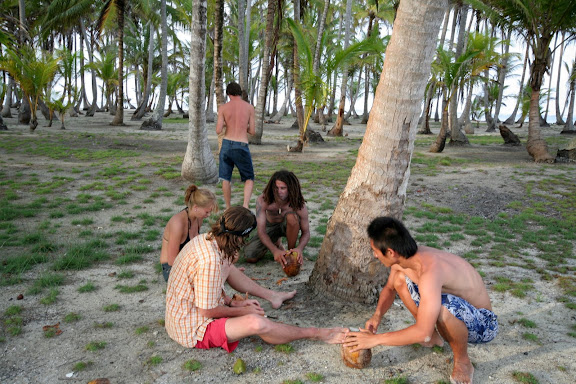 s are a sign of pragmatism, not a disloyalty to their traditional culture.
Some kids are playing basketball and I wouldn’t have been me if I wouldn’t have joined them. So I dribble barefoot away between those smiling kids and place some shots in the basket. One kid has an excellent throw and manages to put the ball in from the side, several times. Will he play for the Panamenian national team, one day? Would that be possible? I don’t know how Panamenian the Kuna indians feel. I know they have a remarkably high grade of independence for a tribe. They are in charge of their own islands. American and French entrepreneurs have tried to buy some islands to exploit them golfcourtwise, but failed. It gives us all a good feeling. Paradise is protected by irrevocable jurisdiction here.