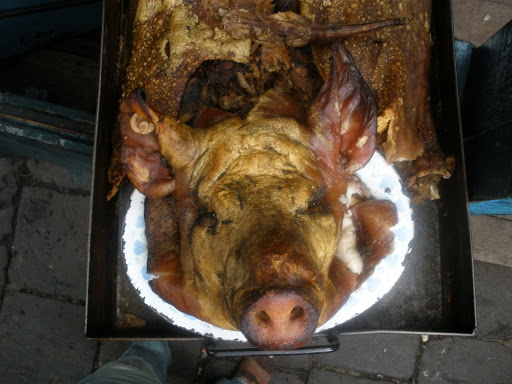 It is light and I drive alongside the Pacific coast. Am I dreaming? The road is not bad, I see palm trees and traditional huts, fisherboats, and a lot of people playing around with their motorscooters. The road goes all the way up from Lima to Cumbles near the Ecuadorian border. I had been on the bus for ages already, and I am a bit bored. It is definitely time for action.

Bus station in Cumbles. Some guys tell me there is strike going on at the border because the dairy farmers of Ecuador want fair prices. Border crossings would be almost impossible today. They take me to a restaurant where it turns out that I buy one of them lunch. The food is plenty. When I go to the toilet I run fast because I’m afraid they’ll steal my backpack. They don’t. When I come back the buttons of my jeans are still open and my backpack is still there. The guys offer me a place to spend the night and are insulted when I recline. I want to move, move, move, on to Ecuador, although right now (there are at least two different timeframes called “now” in this story) I feel it would have been nicer to spend a day or two in Cumbles and swim the Pacific. But I didn’t. I just move on with a small bus towards the border. They put my backpack on top of it without straps and I’m afraid the wind will blow it off. Nervously cramped in the small chair, I arrived at yet another border and hat my passport stamped twice in shady buildings. A guy helped me out to get the Ecuadorian stamp that for some reason you get in on office four kilometers away from the border. I have to take a taxi, and another one back. Since I’m in a Rush, I decide to spend the night in the bus to Quito, why not? He told me it would be twenty dollars (they pay in dollars in Ecuador) and says I can let him buy the ticket. But I know the tricks and asks the woman selling the tickets myself. Of course it’s only ten dollars. So I start explaining my border-guide why I don’t pay him for his service. He lied to me, and I don’t pay liars. That’s one of my few principles. I could make myself very clear in Spanish. He still tried something and you know what? YOU KNOW WHAT? That guy told me I should let my conscience speak and give him some more money. As if my conscience would tell him to send a lying hustler home with big bucks. I got angry with him and raised my voice or, it got a bit sharper. Let my conscience speak! It was not a bad idea. The conscience tells me what to do. If you don’t know any further, consult your conscience and it tells you what to do. Free of charge. If your conscience charges you anything, I can tell you man, you are being ripped off. So in this case my conscience told me to give the guy five bucks. For a lie, that’s way to much, but the lie was not the only thing he had offered me. He had helped me with the taxis and the immigration stamp. I don’t want to mix things up so I told him that for that part of his service I pay him, and for the lying part I scold him. I don’t think he understood me. But I think it was a very postmodern thing to do. I reduced the guy to the service he offered to me in order to distinguish between the good and the faul parts of it. I could have perceived of him as a person, and then my conscience would have told me not to pay him a dime as to execute a moral verdict upon him. For me it felt cleaner.

Walk around in Ipiales, typical border town. A few women playing billiard smile at me. I join them and do quite well. They friendly offer me beer and when I walk off ask me to pay for it. I am a bag of money here. I really don’t like that feeling. All these people see is a walking bag of money and they want some of it. I am not sure what’s worse: being seen as a bag of money of being seen as a bag of bowels. I think about it in the restaurant where I enjoy an excellent meal that will keep the hunger away my night in the bus. When I put my backpack in the luggage compartment, I feel the warm diesel exhaust blowing at my leg. The bus leaves in the drizzly rain. Welcome to Ecuador.