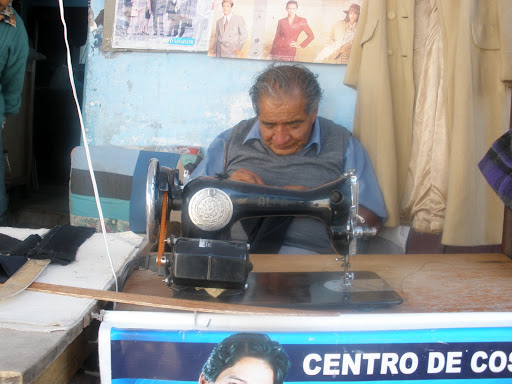 Cusco. Arrived here at six in the morning, went to a hostel with a German woman called Alexandra. We had breakfast in the central Mercado, coffee and an egg sandwich. Bought our busticket to Lima, walked around the Plaza de Armas until about nine.
After that I lied down for a couple of hours to make up for the uncomfortable busride. Later, I walked around again and had my trousers repaired by an old man with an ancient sewing machine for ten Soles. There is now German, Bolivian and Peruvian sewing work in these trousers. While I waited for the old man with a breadcrumb in his eyebrow to fix my jeans, I took a photo of a wall that looked like an abstract painting of a road towards an horizon. Isn’t that a nice idea, taking pictures of dilapidated walls with stains of paint and chunks of chalk that are nothing less than abstract ready-mades? Isn’t this a highly efficient way to turn into works of art what the esthetic eye perceives? I’d love to take a series of these wall-pictures with professional equipment and exhibit them some day. Those kind of ideas, that are distinguished and obvious enough, will have an easy life.
Returning to the Plaza de Armas, I walk into a traditional costumed dancing parade with fast Peruvian panflute music that got a little bit on my nerves. Flee into a café where I write at least some lines looking out over the Plaza. That night, I go back to the Plaza and dance in several bars to old disco hits. A French girl who dances hyperactively says she lives freedom, too.

I will skip Machu Picchu, by the way.