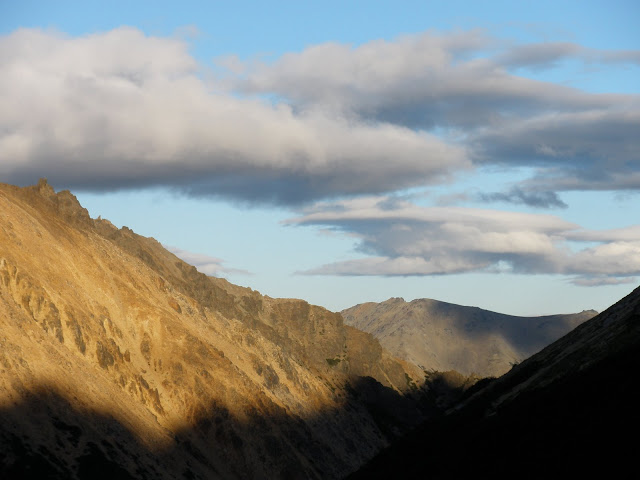 We went for a decent hike to Frey near Bariloche. As a result of last night’s ethanol feast, we started only at two in the afternoon. Took a bus to Catedral, the starting point of the hike and a wintersport base in the colder season. Three hours up, a beautiful cold lake and a magnificent view on the surrounding rock spires. A pizza, a beer and down again. Ruben had a problem with his ankle, but we made it down in time. The climb was not that difficult after all. Sure, the path went up, but it went up in a gentle manner. The massive brownish slopes with the large shades on them made me feel fortunate about the fact that we can see. The mountain inspired me and I had all kind of thoughts.

How do you dissolve a person, I mean which chemicals would you need, hypothetically? It’s a hot day today. Can a person attain some kind of equilibrium, some state where she is beyond being a person? It’s too hot, even in the shade. It’s a tough question. As soon as we communicate we become persons again. No arsenic compound is strong enough to avoid that. Take, for example, the reader of this text. I take it for granted that you are a person, I mean that’s the whole idea when I speak to you briefly at times like now. I assume you have certain humanoid tentacles and a semipermeable skin just like myself. I don’t want to think about the possibility that you are only a computer. In case you are one, please write a comment to convince me you can be interesting to talk with I prefer to be open-minded about those things.

However, a person can feel like she is ceasing to be a person. When she is ignored. When she develops a fear of being ignored. It takes her some time to regain self-consciousness and feel like a person again. The sociopsychological dynamics of this center around the concept of failure. A person who believes she is a failure will gradually fade away as a person. The reason for this is that failure rejects identification. Failure is a bitch, a mean stepmother. If you are told you are a failure often enough, you start to believe it. And if they keep telling you, it becomes part of your constitution, of the way you understand yourself. You? Me. I was told I am a failure, a loser – by people I hold dear. No matter how much I studied and worked, it will never be enough. Inevitably, failure turns into something you can identify with. If failure becomes part of your system, you start to accommodate it. Failure becomes part of your success. Let’s reflect for a moment here instead of halting at this ugly cumbre, this paradoxical formulation of our pseudo-wisdom. After all, I wrote an accepted PhD in philosophy so you will believe me. What is this all about? It is intrinsically impossible to acknowledge failure as such. As soon as you reflect about it, as soon as the failure becomes part of who you are, you perceive a different aspect of it. It becomes success. Now dialectics for me is just a game and often a silly game. But here dialectics has its use. When a failure is considered apart from the successes that make it a failure, it ceases to be one. It even turns into some kind of success. You lose at the Olympics but once back at home, the Gold and Silver medals forgotten, you are the hero of your village just because you went to the Games. That mechanism surely has its function, but it also makes us blind. Everything becomes relative, every failure becomes a success. Of course success and failure cannot be defined objectively, but I want to postpone the dialectical movement of turning failure into its opposite. I want to consider failure pure, be honest about it, feel how we don’t have words for it.

I think it can be healthy. Once you tore down the person in you, you can start to rebuild that person again. If you’re lucky, you don’t need to contrast yourself against other persons, you don’t need to be rude towards them. Recently, a guy asked me to write something on his website. I sent in some baroque poetry and he criticized ist in an unfriendly way. I mean I love criticism but he was just being rude, told me to start over with the pointe and leave out the metaphorical ornaments. Come on! You don’t invite people to write crap on your site and then just be disrespectful with what they write. You have to acknowledge there can be other tastes too. This man was an amateur philosopher can you imagine, no formal education, a guy who “just likes to think”. In my opinion, he is just a dumb conceited asshole. I just liked to think when I was sixteen. Everybody does. If you need some recognition, go get a degree – don’t bother me. 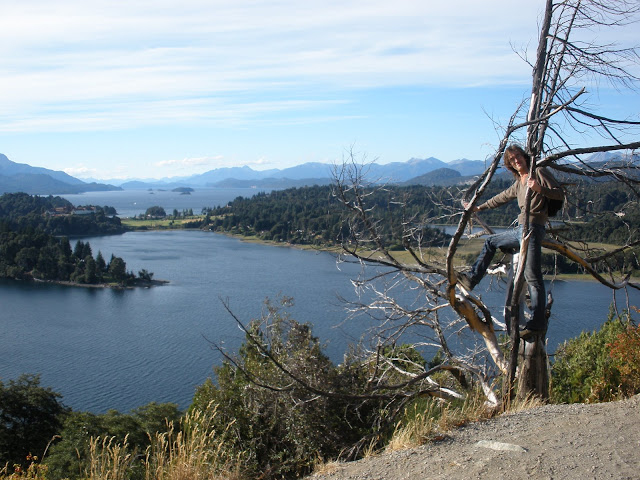 The motorcycle ride from the mountain Frey back to Bariloche was great. There were three of us on one light bike, no helmets, we held each other’s back and I carried all the backpacks, we didn’t drive fast it was a great feeling the wind in our hair. We had to cut off a curve to avoid police control. It was really exciting and it made me feel very alive.

When the concepts of death and peace converge, our ride down here is over. We have found a place, somewhere on the face of the earth, to lay our head down and sleep sleep sleep without the burden of a tomorrow. I want to postpone that a little bit. And you want to know why? Me too.

That night I did not dream about a steep slope with hunderds of babies on it, crying unorchestrated like a field of buzzing insects. It is a vulcanic mountain they are on and the crater starts dripping and soon spouting milk in short spasms it does not reach the babies they are starving and screaming verociously. The toddler’s buttocks start to swell and swell until they are the size of volleyballs and nipples start to grow out of them big rosy nipples and the children start to reach out for them with their mouths they stretch their necks as far as they can to touch the fleshy mammae and start to roll over yes to roll over each other the youngsters roll down the slope and all drown in the mountain lake down the slope that has almost dried out. Then the vulcano starts to spout heavily, a very, very reliable stream of milk flows down the mountain slowly and replenishes the lake.