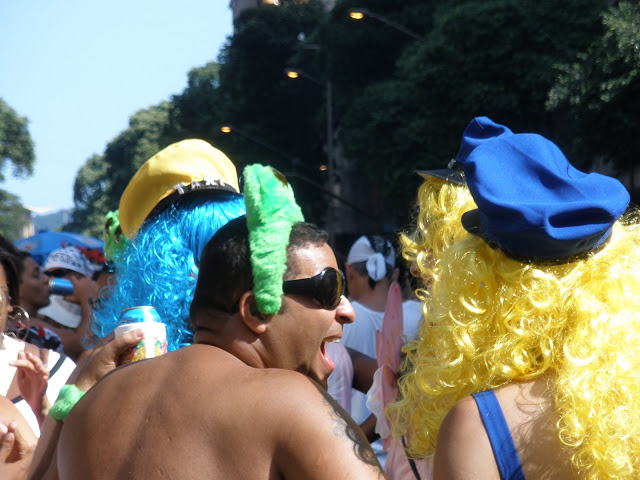 Total detachment is a crying freedom. The days are so hot that the hammock catches the odour of its sleeper and you have to use chalk powder and shake it real hard. In the morning, we went to a bloco (a street parade with drumming and dancing). The drums had a lot of energy. These blocos are great! People threw water out of the window to sooth the heated crowd; I rubbed an ice cube in my neck. Everybody’s sweating and moving to the drum sounds that penetrate your ears. Some dogs are dressed up. On the ground are cans and people who collect them. A rope seperates the drummers from the crowd. We just dance and forget who we are.

In the afternoon I went to buy my bus ticket to Sao Paolo in the Rodoviaria and walked around a little in the neighbourhood with the intention to see something else in this city than carnival. It was dangerous though, and I reached the limit soon enough. I sang as I walked under a long freeway flyover chasing my long shadow. “So e feliz quem /pensa bem e / fazo bem” was written on every concrete pillar supporting the flyover. I sang and then I saw where the extravagant Carnival waggons come from. The remise was dilapidated and it looked dangerous there, in the womb of the Carnival. Further on, I kept taking pictures of the neighbourhood that gradually got more interesting – and more dangerous, until I saw a kid in a window yelling at me holding something in his hand that looked like a gun. I turned around and ran back to the safe haven of a small bar, where several people discouraged me to take photographs because you might be robbed for your camera if they see you handling it. I didn’t need the advice: I’m heedful enough. An Italian guy showed me how to get back to Central. Grazie mille. The houses still got worse. People live in piles of stones and dust and dirt. Two policemen carrying big black assault rifles were doing a drug raid. They told me so when I asked them. They had to pick up a drug trafficker that lived in one of these ramshackle domiciles. I decided that I’d seen enough and went to the Central station which is crowded and safe. I looked at two girls who were walking in the opposite direction. After the moment we passed, they turned around at exactly the same time I did, and we gave each other a nimble smile. I do not only see, I am seen.