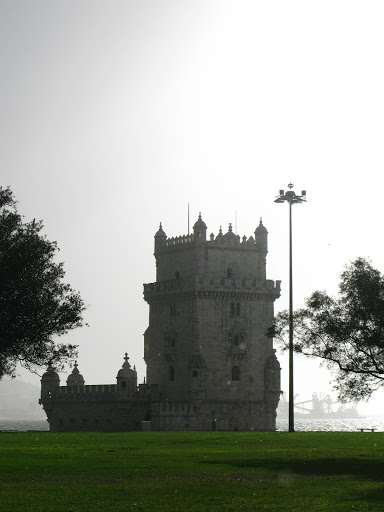 There are very good Pasteleria’s in Lisbon, and the coffee is very cheap. I can work fast without caring too much about quality, about what the reader might think. I can’t put the bricks of words together when I know what the building must look like. I can’t guarantee you the building isn’t going to collapse when you enter it. The only thing: I put the bricks together as tightly as I can and I’m not going to make any windows for you.
Soon spring will arrive again. It’s true, here I’ve already seen blossoms and buds. Portuguese spring is early. And spring can change things, or at least nourish the childish vital believe in ‘real change’. Obama won his most important contest in the spring of 2008. The idea of a changed life, not only spare parts being exchanged, not only 180 degree rebellion kind of change, but the change of a life that organizes itself around some point that had existed before of course, but never functioned as a crucial joint. If you need an example for such a transformation, I am one. Today I found some old classmates of computer studies. They are all working in companies, as programming experts, CIO, CEO, software developer, JAVA-specialist and what have you, and I envie them in an abstract manner. Knowing who you are, what the joints are, the hinges of your life, and just turning the wheel around, perhaps they dream about something else but at least their dreams are organized around familiar points. Maybe they changed just as much as I did. You can’t tell from the outset. I have tried to explain that changing thing but it is like explaining why death has to prevail over life. Proclaiming your own detachment from everything that mattered in the past is a dirty scandal. You shall not begin a new life built on the barren abstractions you forced yourself to attach to your old life

.
That night, I did not dream about big trunks of moldy wood that were all warm. Suddenly insects begin to crawl out looking at the spectator with huge eyes, they get bigger and bigger their eyes and the insects, they drag giant bladders behind them, human bladders filled with piss like warm balloons, they drag them out of the wood that breaks apart as they pass. They keep looking at the spectator as to scare him away but the spectator cannot move because he is stiffened by his fear of the crawling roaches. The insects place the bladders near the fresh wood the machine of the timber company just dropped next to the moldy wood. The giant bladders empty themselves over the wood that got all wet and start to rot in front of the spectator’s eyes. The fresh wood is already decayed and insects begin to crawl out with their big insect eyes that never close. The carry giant bladders with them and some uteruses too. That night I didn’t dream at all. I guess now you know better what I feel than I do.