The trainride was comfortable, and the other three guys on the bunk beds in my compartment were very friendly. They offered me some cold chicken for dinner. We spoke in some kind of Russian–English that I came to like as the train rushed to the Ukrainean border. We went to bed, only to sleep a few hours. The border crossing was not spectacular, but weary. Instead of being haressed and arrested by some Russian special forces, highly trained to recognize foreign travelers who don’t register their stay or have other irregularities on their paperwork, and take them in to squeeze some good money out of them. Didn’t happen. A friendly Russian lady just took my passport and gave it back after ten minutes, nodding that everything was fine. My fellow travelers congratulated me ‘officially’ and welcomed me to the Ukraine. After another hour however, the Ukrainean border control wanted to see my id, too. As I handed it to them, with a kind smile as always, one friendly uniformed man became suspicious, and looked to my photo and me, slowly nodding his head, then signaling me to come with him, to his colleague who was to give a second opinion. So it went through my head “what if they don’t recognize me? What if I turn out to be a different person than the guy in the passport? But he was me, wasn’t he? Yes, but he couldn’t proof it. And the passport guy looked much younger than I did, too. So they’d take me to a cold prison cell, connect me to strange equipment and make me very sad.”
…Fortunately, this colleague said yes, that’s him. To cut the story short: if you travel to the Ukraine with an old passport (without fingerprint id) make sure your picture looks like you. Shave yourselves, for example, because that was of course what I had forgotten to do, and my ridiculous tourist beard gave the highly trained border guard a hard time in comparing me to my photograph.

So, Kiev. The climate was cool upon my arrival at 5am. Fortunately, we found a cafe where we had some breakfast. Then we parted, and I walked around the station, ate an apple for 1 griven (about 10 eurocents; the griven dropped during my stay), and went to the cafe again to write. The waitress would not allow me to sit without drinking more coffee than I could endure, and wanted to send me out. I gave h 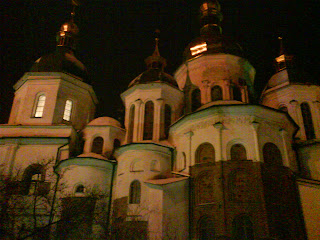 er a concise English lecture on moral code and general hospitability, the coffeehouse rules and a codex of courtesy principles every human being should obey, which of course was buried unattendedly in the cafe rumours. I thus let it be, and went outside.

The morning grew older, and I decided to take the metro to the center. There are only three lines, and the system is similar to Moscow, so I felt comfortable with it right away. I bought a blue chip to enter the system (price: 2 griven; a few weeks ago it was 1/2 griven. Anyone remember the last fourfold rise in public transportation fares in the Western World? Exactly). I got off near the Maydan, the central square, in the most expensive shopping district (all the fancy names were in the shopping windows). It had a touch of Paris, I felt. Anyway, my backpack began to feel heavy, and I stepped into мистер снек (mister snek) to have a sandwich and write.